Ocicat “Saphira”. Photo credit as per the image.

Both prefixes are derived from the history of the cat and are bound up with it.

This cat breed was an accident. Well not quite, in truth. The original cat that prompted breeders to develop the Ocicat was indeed an accident that arose out of an attempt by Virginia Daley a well-known breeder at the time (1964) to breed an Abyssinian pointed Siamese cat (Aby-point Siamese).

The resultant attempt (not sure how it was done – Siamese and Abyssinian? – the Ocicat Breed Council website does not say) produced an “ivory kitten with golden spots”.

This was at a time, in 1964, when the beginnings of an interest of creating domesticated cats with a wild cat appearance surfaced. Although well-established now, at the time this was a new concept. The reason for this kind of breeding was no doubt in part financial but also it was claimed to highlight the plight of the wild cats, which were and still are in one way or another generally persecuted. It seems that that objective was not met. Other cats with a similar wildcat/domestic cat appearance that were bred at a similar time were:

Both the California Spangled and the Ocicat had faltering starts one way and another and so it seems the Bengal became the supreme wild cat/domestic cat. The Savannah cat is catching up.

But for the desire at the time to produce a cat with wild cat appearance and domestic cat temperament it could be argued that there would not have been any interest in this ‘accidental ivory cat with spots’.

Above: Tonga the “first” Ocicat. I don’t know if this actual cat was the cat that was the accident – the Accicat. I don’t think he was although the timing (1965) indicates it is. The Breed Council is a little hazy on this it seems. He looks remarkably like a Bengal cat or even a Savannah cat; elegant with a ‘foreign’ body conformation.

In case you came to this page before the Ocicat page and don’t want to stay, here is a modern Ocicat. I have no idea of this cat’s status meaning whether he/she is shown at cat shows or not but he/she is very similar to the original Tonga. A show cat is shown below at a Madison Square Garden CFA Iams cat show (2006): 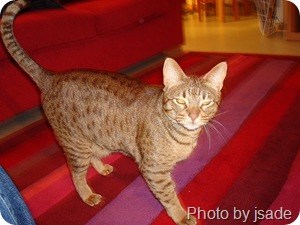 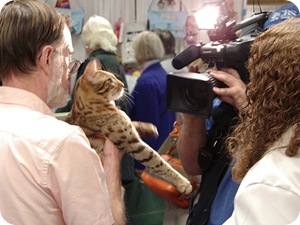 SOME MORE ON THE CAT BREEDS:

Dr Desmond Morris calls them "abnormal breeds". I had never heard the term before. He is referring to cat breeds ...
Read More

Here is a list of the 10 friendliest cat breeds towards humans. You have to be careful when you make ...
Read More

How many cat breeds are there? More than accepted by the associations.

How many cat breeds are there? The answer to the question depends on whether you want an absolute answer or ...
Read More

The name Puppykat Puppykat is interesting. It conjures up a vision of a half dog half cat! But no wait ...
Read More

This is a cat breed selector in the form of a slide show. That might sound strange but it works ...
Read More

Through Persian cat selective breeding the appearance of the cat that you know (probably the extreme Persian look) has been ...
Read More

I've just bumped into information about the Shandong Lion Cat. I had never heard of this supposedly exclusive Chinese cat ...
Read More

The Cashmere Cat is a semi-longhair Bengal cat with a body shape i.e. conformation, and colour which is identical to ...
Read More

This is a cat 'breed' that might have happened but it never did. It is also described as the black-headed ...
Read More

Is the Ashera cat real?

Yes, the Ashera cat was real. There are possibly some Ashera cats still in existence. The Ashera GD was the ...
Read More
Please comment here using either Facebook or WordPress (when available).