Dr Overall1 says, “I think we’ve got an epidemic of understimulated cats whose intellectual needs aren’t being met”. She believes that not enough people recognise the intelligence in cats. For her, the most important need for a cat is the intellectual one.

Temple Grandin in “Animals Make Us Human” writes that “cats are genetically adapted to living free out of doors. If you live in a safe country area, you should probably think about having an indoor/outdoor cat.”

She refers to the extreme of indoor cat living: locking a cat in a bedroom all day while the owner goes off to work. That is like keeping a tiger in a cage at a zoo. 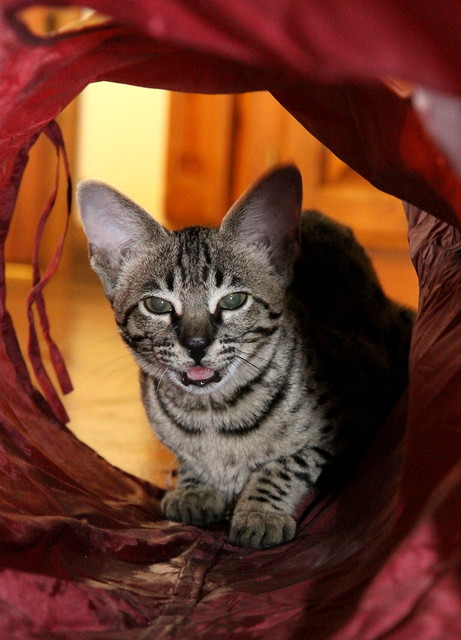 F2 Savannah kitten in a play-tunnel. Plenty of mental stimulation

Keeping the need for mental stimulation in mind and a recognition of a cat’s cognitive abilities and emotional needs, Temple Grandin, says:

She equates “seeking” with curiosity, looking and searching in preparation for hunting. That is how I understand her concept of “seeking”.

Cats who go out are able to turn on their seeking system through hunting. In America there are complications in doing this because of (a) safety and (b) preying on native wildlife – something that a lot of people dislike.

For indoor cats, toys and games in which something moves stimulates the seeking system she says. A cat’s brain is triggered by movement as the cat is a natural born hunter.

The need to stimulate in this way – iPad games are one example – is reinforced by what Marc says about how he keeps his cats contented while living indoors. Marc places a lot of emphasis on playing with his cats and providing a stimulating environment.

I tend to agree with these ladies. I particularly like what Dr Overall says. Intelligent cat lovers know that their cats need stimulation and to be treated as smart sentient beings who are also individuals. Many people don’t quite get this. They fall a little short of the mark leaving their cats declawed and bored.

A lot of us are not that keen on cat training of any kind. However, I accept her point. We need to focus more on the intellectual element of our cat’s needs.

The video, below, of a cat “hunting” a letter posted through the letter box would seem to be an example of a cat expressing his seeking and then hunting system. He may have been trained to do it. I don’t know, but he apparently enjoys it. It looks like a form of domestic cat hunting to me. A distortion of the real thing but that all important mental stimulation is present.