Are there any Siamese cats in Siam (Thailand)? The answer is yes and no. I’ll try and explain that. I think this is an interesting question because it is a way of confirming that the history of one of the most celebrated cat breeds is correct. It is also a way of seeing what an original Siamese cat looks like. Let’s not forget that the glossy purebred Siamese cat we see in magazines and show halls is positively not the same cat that you might see in Thailand, if they are there at all. 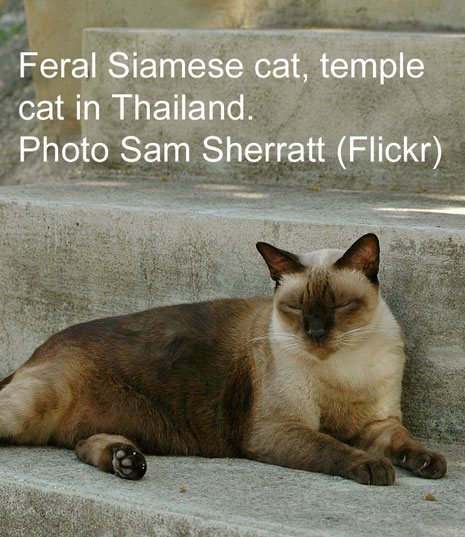 My initial internet research today indicates to me that:

A person who lives in Thailand or is visiting says that…

I find that most of the cats you see in Thailand are just the ordinary tabby , black and orange ones, you don’t see so many Siamese ones with the blue eyes. According to one Thai woman this was because “all the Siam cats go for export!”…(Lonely Planet website)

The last comment must be a joke because the way people in the West (USA and Europe in this instance) acquire Siamese cats is from breeders. Other than that, the comment does make sense though. It is exactly what I would expect to hear from someone living in Thailand. And perhaps it might not be a joke about exporting Siamese cats but there is nothing on the internet to suggest that people import Siamese cats from Thailand en masse.

It is all but impossible to find out if there are Siamese cats in Thailand today without going there and snooping around. There are no Siamese cat clubs in Thailand as far as I can tell and I can’t find a Siamese cat breeder in Thailand from an internet search. That does not mean they don’t exist. But it does mean that there are not many of them or hardly any at all. The internet is always a good indicator in the modern world of the level of commercial activity of a certain business.

As to photographs of Siamese cats in Siam today, I have found another one! On Flickr again. It was taken in 1989 by a Canadian photographer who was visiting the country. She used an old film camera. Digital cameras were probably just coming out at the time. She has not responded to my request to use it so I am using it in any case! I claim fair use (see base of page for argument).

The above picture was taken in a Bangkok Soi (I think “soi” means a back street). The photographers says she saw lots of chocolate and seal point Siamese cats. That squares up with the history books as they say the original colours are seal and chocolate although seal (dark brown) is recognised as the classic Siamese cat pointing colour. Although seeing a lot of them does not square up with the other comment.

The photographer says she thinks the cat in the picture is a lilac point. Well to me he or she looks like a lynx point. In fact I would bet my last dollar on that. The lynx point is a relatively new creation in the West. It is a tabby pointed Siamese and you can see that the tabby gene is present by the M mark on the forehead.

Siamese cat in Siam plus some other types.

Where does this leave us? Well, in conclusion, it seems that there are Siamese cats in Siam in 2012. They are probably – and in fact should be – the same sort of Siamese cats that were there in the late 1800s and which were exported to England. I am pleased to see that. Although I don’t think they are as commonplace as the standard tabby or bicolor street cats. Also the street Siamese are, of course, not purebred pedigree cats in the formal sense. They are pointed moggies.

Their shape is classic semi-feral. This is nowhere near the shape of either the applehead or modern Siamese cats. The Siamese cat in Thailand is a normal feral cat and bound to be slightly slender. I am sure this is the way the Siamese looked in the late 1800s.

Some Siamese are temple cats. These cats are probably better fed than street cats. The top picture is probably of a temple Siamese.

Rationale for using picture: The picture has no commercial value and publishing it here will have no impact on the photographer. In fact this link to the Flickr page helps the photographer.