The Bali tiger is extinct. It disappeared in the 1940s (Sunquists) or as late as the 1950s (IUCN Red List). Its scientific name is: Panthera tigris ssp. balica. 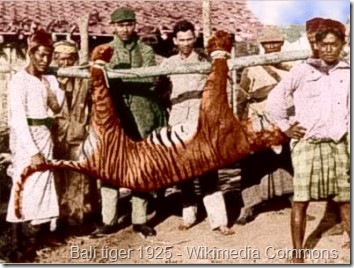 Above: Picture of a hunted Balinese tiger 1925 – Wikimedia Commons. In those days it was considered a nuisance. 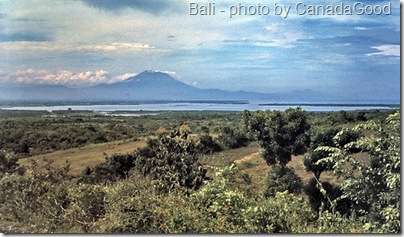 Bali is the island ringed in green to the right of the islands of Java (ringed in red) and Sumatra (ringed in blue). All three islands had their own subspecies of tiger. The Sumatran tiger still exists (just) while the Javan and Balinese tiger are extinct.

In the book Tiger bone & rhino horn: the destruction of wildlife for traditional Chinese …By Richard Ellis the author tells how the tiger on the relatively heavily populated neighbouring island of Java was simply treated as a nuisance. It got in the way and was eradicated. The same treatment was accorded the Bali tiger it seems.

I think it would be fair to say that what is happening to the Sumatran tiger today happened to the Bali tiger before becoming extinct to which one has to add the fact that in the early part of the 20th century sport hunting of tigers was commonplace and this was a major factor in its extirpation.

The Bali tiger was last positively observed on the west of the island in the 1930s. The IUCN Red List says that the cause of the extinction was hunting, loss of prey and habitat. A national park was set up (Bali Barat National Park) in the early 1940s but it was too late.

The west cannot criticise the east for destroying forest and overseeing the loss of major wildlife. In England, for example, over the past 3,000 years the people deforested most of the country and killed most of the large wildlife leaving them extinct thousands of years ago (wild boar extinct by 1260). The English were ahead of the game when it comes to eradicating wild life!

There is very little written about this tiger subspecies, probably because it is extinct and because the subspecies on the neighbouring islands suffered or suffer the same fate.