Marie Clements, is a Traditional Siamese, Balinese and Color Pt Lynx breeder. There are very few Color Pt Lynx breeders in United Stated found and around the world. She has already written about the Applehead Siamese. Her cattery is Siamese Royalty. The following is what she says. The photographs are hers. The cats are traditional Balinese.

The Siamese is considered by many to be a ‘natural’ breed – that is to say, developed without human intervention. On occasion and over the years, long haired kittens appeared in short haired litters, but breeders usually dismissed them as undesirable anomalies. These long haired Siamese kittens resulted from a natural spontaneous mutation that occurred within the breed itself. Early drawings depicted pointed cats with what seems like longer fur.

Others say that the longer coat is a result of the early British breeders crossing the Siamese with the Angora or Turkish Angora, a cat that has a tremendous history as a companion cat. 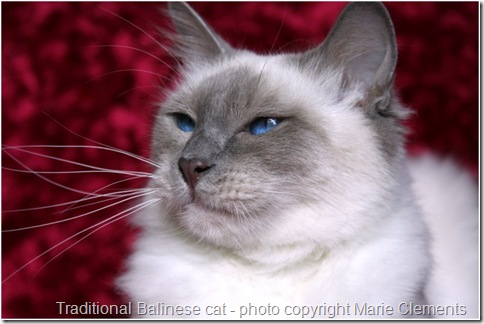 Records indicate, however, that long-haired cats of pure Siamese ancestry were registered with the Cat Fancier’s Federation as early as 1928. And in 1940, two breeders, Helen Smith of New York and Marion Dorsey of Southern California, admired the beauty of the long-haired coat, and were the first pioneers to breed these cats and to gain recognition for them.

Helen Smith gave them the name “Balinese” because of their elegance and grace which reminded her of ballet dancers. Combining together the prefix, “Bali”, from “ballerina”, and adding the suffix “nese”, from Siamese, she created the new name “Balinese”. The Balinese cat was then developed in the United States as a breed of its own.

At a glance, the Balinese resembles the Siamese cat, except for the length of the coat, including their distinctive bushy tail. A Balinese possesses all of the charm and beauty of the Siamese cat but has the added benefit of possessing a uniquely silky, angora-like coat.

Balinese cats are intelligent and playful. They easily adapt to the sounds and idiosyncrasies of children, often being at the center of things. Unlike the short-haired Siamese, the Balinese is a more laid back cat and can often adjust well to a variety of animals.

They can easily adapt and are accepted immediately, fitting in well into their home with established cats. Like the short-haired Siamese, they soon dominant the household, ruling over other non-Siamese cats. However, unlike the short-haired, their laid back nature allows them to rule with sensitivity.

The Balinese also makes a great companion for your dog. They are often seen curled up together and will even allow themselves to be groomed. Their intelligence, curiosity, affection and calm nature makes them a wonderful pet because it makes them so ‘human like’.

Their loyalty, which exceeds that of the short haired Siamese, often resembles that of a dog more than a cat. They will follow you about or wait patiently outside a door for you to return home so they can once again resume interacting with you.

They love to sleep in your bed, play fetch or make up other games. Unlike the short haired Siamese, they are independent enough to adjust better to periods of being alone. These creatures take longer to develop their personalities, intelligence and eye color. Their voices are far softer and they speak only when they have something they think is important to say. 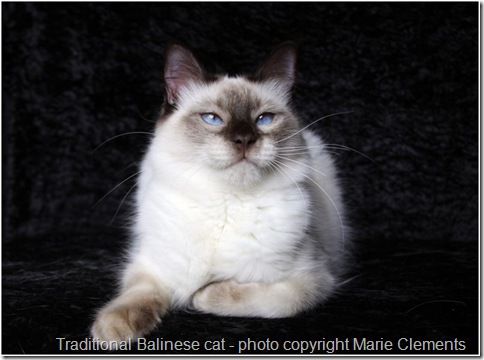 The Balinese tends to be, on average, slightly larger in size than the short haired Siamese. Males weigh from 12-16 pounds and females 8-12. Balinese are known for their longevity making them the longest living breed of all the long- haired cats.

Their life span is equal to the short haired cats, ranging from 18-22 years for a healthy cat. Early history shows that the Balinese has the same history as the old-style Siamese.

"The Encyclopedia of Cat Breeds", by J. Anne Helgren, which offers comparative evaluations of various traits of various breeds, lists the Persians and Himalayans as a 10 on a scale of 1-10 regarding grooming time and the Balinese a ‘4’ on a scale of 1-10. Only short-haired cats require less grooming, according to her book, the Siamese and Tonkinese being listed as a ‘2’.

The long-haired Siamese coat is only 1.5 inch long towards the end of it body with a bush like tail. The fur consists of a thin, silky angora structure that has no undercoat (single coat) and this decreases the occurrence of molting. Consequently, the Balinese makes the desired choice for allergy and asthma sufferers.

Despite popular beliefs, it is the protein excreted in feline salvia  (Fel D1) and skin glands that bring about an allergic reaction, not the cat dander itself. A cat like the Balinese, a spontaneous mutation of the Siamese, excrete feline saliva at a lower molecular weight, reducing the likelihood of an allergic reaction. For this reason, it is their unique silky Angora fur structure which gives the Balinese cat the advantage over their counterparts. The Balinese is a particularly attractive option for the discerning pet-seeker. It possesses all those famously unique characteristics that the short-haired Siamese offers and then some.

Thank you Marie for writing about Balinese cats.