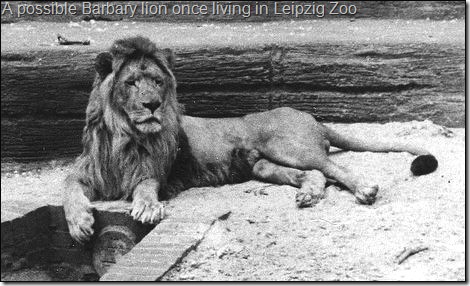 I am concerned about the Barbary lion. It is said to be an extinct subspecies of the lion that lived in an area of Africa called the Barbary coast, which is that area of north Africa (Morocco to Egypt) that has its coastline on the Mediterranean1.

extinct) in Morocco in 19213. Although the last one is also stated to have been shot in 1922 in the Atlas mountains (which cross into Morocco)4. Yet another source says that the last lion in Morocco was killed in 1942 at the Tizi-n-Tichka pass in the Atlas Mountains5. It is probable that this subspecies of lion survived in the High Atlas Mountains until the 1940s6. At that time the science of taxonomy (the practice and science of classification7) was less advanced. Today with DNA testing classifications are being re-written. Was the Barbary lion, therefore, a subspecies of lion or simply the African lion Panthera leo leo (Linnaeus, 1758), that occupied north Africa on the coast of the Mediterranean? Well, it seems that DNA of lions living in north Africa is available (was this from the skulls of Barbary lions kept in museums? It seems to be the case) and therefore reference can be made to that. In fact mitochondrial DNA research showed a mtDNA haplotype that is unique to the Barbary lion. This is a molecular marker8.

The use of molecular markers took place with respect to a couple of lion skulls that were excavated at the Tower of London from medieval times (13th and 14th centuries). The lion skulls were found to be Barbary lions from the time when this species of lion was kept by royalty as gifts from royalty or wealthy merchants from north Africa, quite probably. They were part of the “Royal Menagerie” that was housed in the Tower of London until 18359. Western north Africa was a natural source of lions for merchants trading in Europe up until it became extinct. In 1968 a study on the African, Cape (extinct), Asiatic and Barbary lion found that the same skull shape (very narrow post-orbital bar) existed in the Barbary and Asiatic lions only10. Where these the same lion species?

The only current affirmed11 subspecies is the Asiatic Lion or Indian Lion which lives in small area of northwestern India – Gir Forest (please see Lion Habitat). The Asiatic lion is the only lion, today (2009), living outside sub-Saharan Africa. It seems that the Barbary lion was different from “ordinary” African lions in that it had a thick dark brown mane and dark brown belly fur. The ruler of Ethiopia, Haile Selassie was supposed to have kept them (Ethiopia, now Somalia is in north Africa). And it was the lion that was imported by the Romans for gladiatorial contests etc. 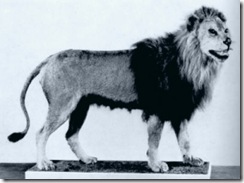 lion, weighing up to 250 kg. and be 3 meters long. The heaviest weight recorded for the African lion, as set out in the best known wild cat book, states a weight of 201 kg. There is claimed to be 40 Barbary lions in captivity in Europe and about 100 worldwide. One problem with saying that the Barbary lion can be distinguished from other lions on the basis of its mane is that a lions mane varies substantially anyway e.g. due to temperature. However, it was deemed likely that there are other less obvious but nonetheless distinct differences in appearance between the African and Barbary lions. These have been reconstructed using paintings and photographs.12|13|14|15|16

It is also thought that the behavior of these lions was different, living in small family groups, for instance17.

To say that this subspecies of lion still exists in captivity could be a bit rash without genetic analysis. Has this been carried out on the 40 captive lions in Europe? In 1996 three lions that looked like Barbary lions were rescued from an abandoned circus in Mozambique18. It was not known at the time that they might be the Barbary subspecies. There appearance was similar. The intention was to breed them and return them to the wild. Genetic analysis would have had to have taken place to confirm the sub-species. I don’t think this was carried out.

Although the last wild lions from the Barbary coast were extirpated by the latest 1942 in Morocco, it is thought that the last true purebred captive lions of this subspecies were those belonging to the Sultan of Morocco. The Sultans lions had a checkered history19:

And a studbook (a book detailing breeding) created from old records of these captive lions would assist in the further breeding this subspecies. But it seems that the descendants of these lions would have to be crossed with African lions to avoid inbreeding leaving the offspring non-purebred.

This is a subspecies of lion that was mercilessly persecuted by humankind until extinct and the attempts to recreate this animal seem ill conceived and frankly rather pointless. Isn’t it simply too late? Isn’t it better to focus our energies on saving what is left in the wild?

Interesting early references to this lion from the 1800s

Above: From “The wonders of nature and art: comprising upwards of three hundred of the” …‎ – Page 57 Above: From “Rudiments of geography: on a new plan, designed to assist the memory by” …‎ – Page 160 — by William Channing Woodbridge

2 presumed in the public domain

13 Wild Cats Of The World by the Sunquists

17 Simon Black, of the Durrell Institute of Conservation and Ecology at the University of Kent in Canterbury, UK