People search for a black leopard picture. Here are four, two of which are, I think, a little unusual. They big ones with the Polaroid borders are not very sharp but they are good nonetheless because they arrest the attention. The leopards are jet black or they look that way. Sometimes a black leopard is very dark with a black or dark grey pattern but not all black. 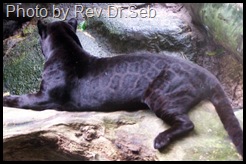 Even leopards that seem completely black have an extremely faint pattern. In fact black leopards have a range of “blackness” and, as is the case for other melanistic animals, are not always what appears to be jet black.

This picture right is of a captive black jaguar (it has larger rosettes – hollow spots – than the leopard). This is a cat that looks like a leopard even when it is not black!. The picture makes the point very clearly. You can see the faint black pattern. 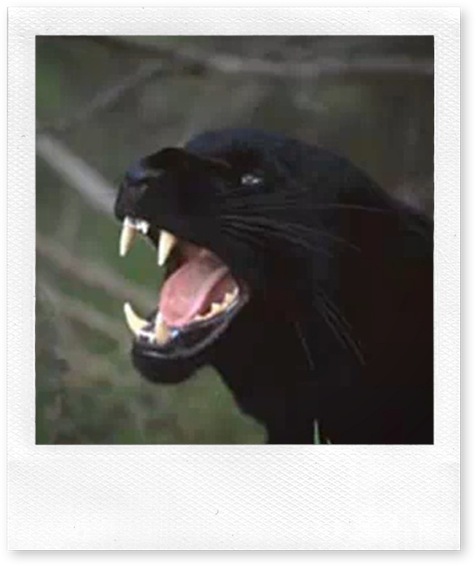 The black leopard is also called the black panther but then so is the black jaguar. The word “panther” is used generically to mean a large wild cat of unspecified species. It usually applies to black (melanistic) wild cats but can also be used to describe the cougar or puma.

The black leopard is the same in character as a conventionally coloured leopard as it is just the coat colour that has changed due to the genetic make up of the cat. But can a cat’s coat change its character? Some people think it can. And that does seem a possibility. Black makes it less visible at dusk, dawn and at night which might alter its hunting technique, for example. 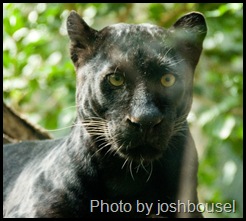 The word “melanism” comes from the Greek meaning “dark-coloured”. It describes the substantially increased amount of dark pigmentation called melanin (which can be found in fur, skin, feathers and eyes etc.) in an organism and in this case it is the individual hairs that have an increased level of dark pigmentation in them, which masks the usual leopard pattern. It is caused by a genetic mutation. Being black may aid survival and accordingly, over time, the number of animals in a species where it occurs may increase. This is called natural selection under Darwinian principles. It may well be that in say 10,000 years that all leopards are black in a region if it aids survival and if there are any leopards left in the wild at all at that time.

In the cat world melanism occurs more frequently, it seems, in both the leopard and jaguar and the term “black panther” usually refers to either of these cats. Melanism should occur more frequently in the jaguar as it is thought that the mutated gene is dominant in the jaguar, whereas for the leopard it is a recessive gene that produces the melanistic cat (src: hdw-inc.com). I don’t, however, know of any reports on this subject but if half the leopards in Java are black it may be that a dominant gene is at work. This may, though, be incorrect. The Sunquists (Wild Cats Of The World) simply state that melanism is caused by an “autosomal recessive gene” without specifying species. “Autosomal means not sex related.

And example of a wild cat hybrid that is melanistic can be seen here: Black Chausie – there is also a melanistic Jungle cat on this page)

The occurrence of black leopards varies according to the location and therefore habitat:

The leopard has relatively short legs and like the jaguar is stocky looking. The jaguar is generally slightly larger. The leopard is one of the big cats; a cat that can roar. 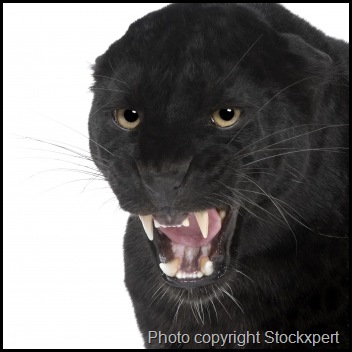 Black leopard picture – Photos: small thumbnails: Attribution-Non-Commercial-Share Alike 2.0 Generic. The large pictures are stills from videos where the images are judged to be in the public domain except for the one above, which was purchased. 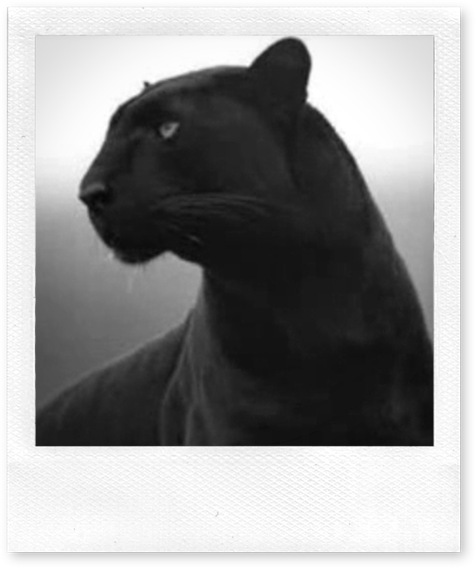 The texture and length of fur of the leopard varies from region to region. In Africa it can be short and course while in northern India, for example, it can be soft, longer and thicker. The undersides are always covered by soft fur, however. We all know that from our domestic cats as it applies to all cats.