This page is about black panther pictures from any legitimate source plus information about the black panther.

Over 150 years ago many eminent scientists of the day believed the panther to be a separate species of wild cat. However, today, I should think that most people know that the “panther” is not a species of wild cat but a non-scientific or popular name that is usually given to a large black or melanistic wild cat other than the lion and tiger. This normally leaves the jaguar and the similarly sized leopard and also, less commonly, the cougar or mountain 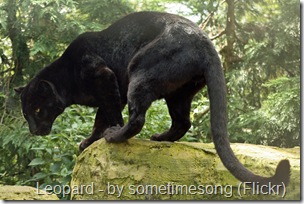 lion (but see below). Of these three cats the black leopard (Panthera pardus) and black  jaguar (Panthera onca) are most commonly described as black panthers. Although the term is not limited to these cats.

Indeed the term, “panther” is also used to refer to cats sighted in unusual places well outside the range of large wildcats. These observations have until today (May 2010) been unconfirmed. So called “black panther” sightings in England, for example, have been sensationalised but in a tongue in cheek way. There has never been confirmatory evidence. Finally the term “panther” is not restricted to the description of large black cats. It can describe normal coloured cats but this is a less common usage in my opinion.

The black panther picture above/right is of a leopard. Leopards have a wide range in African and Asia. As a consequence this wild cat has a wide range of habitats and prey types.

As mentioned, at one time black panthers were considered to be a separate species as the following text illustrates: In this black panther picture you can see that the artist has correctly identified the dark spots against the dark ground colour. Black panthers are not all black. The usual spots are still visible and more visible from certain angles and in certain light. The above picture comes from: The menageries: Quadr

To conclude this section on the black or melanistic leopard, I would like to refer to an earlier page that deals with the subject in more detail: 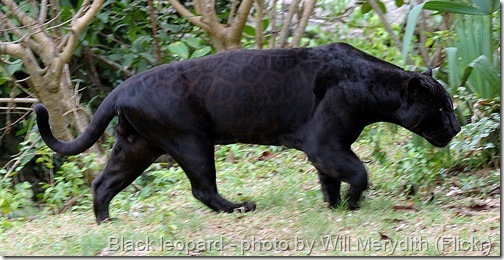 The slightly larger and stockier jaguar is probably the wildcat that is most likely to be referred to as a black panther and which is the subject matter of black panther pictures. 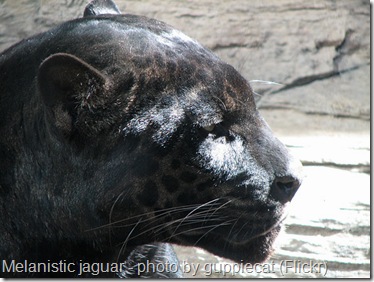 I like this black panther picture for two reasons:

The jaguar habitat is also wide as the shrinking range encompasses central and south America. It used to included parts of the USA.

Here is another black panther picture – a black jaguar at Edinburgh Zoo, Scotland: 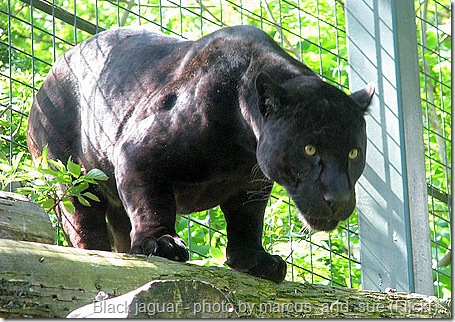 This nice picture shows how the jaguar is more muscular or stocky than the leopard.

William Smith Ph.D. writing for the Feline Conservation Federation (FCF) magazine in April/May says that about “6% of jaguars manifest as melanistic”.

The jaguar generally played an important role in the culture of the people who shared its habitat (jaguar myths legends). The black panther was probably prized as ritualised captive and sacrificed animals. 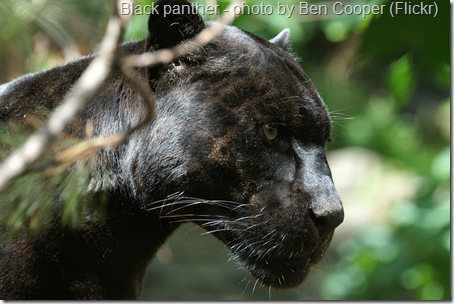 Melanism, the process that causes the tawny, yellow cats to become black is, as far as I understand it, not fully understood except to say that genetic mutations are at play.

In the jaguar the mutated gene is incompletely dominant, resulting, on the face of it, in a greater number (proportional to the over population) of black jaguars than in the leopard where the gene is recessive1.  However, the black jaguar is relatively rare (see below). The realisation that black panthers were the same species as non-black panthers came about when in a litter of leopard cubs mothered by a yellow coloured cat there were a mix of black and normal coloured cats. See the extract above.

Jean Léopold Nicolas Frédéric Cuvier (August 23, 1769 – May 13, 1832), a French naturalist and zoologist, stated in 1839 that he had seen yellow and black cubs suckling the same mother. The situation regarding the classification of the black panther was nonetheless in dispute beyond that date.

I have referred to melanism in wildcat hybrids on these pages for further reading:

There is no doubt in my mind that an F1 Safari cat if seen in a public place at night without a human caretaker would probably be described as a black panther and its size exaggerated.

“Black or very dark phenotypes in a population; as with black cats in a feral population” – not a very illuminating definition, frankly.

The same authors describe melanin as:

“Coloring pigment of the hair, iris of the eye and skin.”

This states that the skin of black panthers is also black. Sphynx cats have skin coloured the same as the hair if it existed!

It is said2 that melanistic cats have an advantage over yellow coloured cats in terms of:

Melanistic pumas (cougar or mountain lion) have been reported but never authenticated. Do they really exist? There is considerable doubt.

In 1797 in a book called “Buffon’s Natural History” Vol 7, he refers to the black cougar: 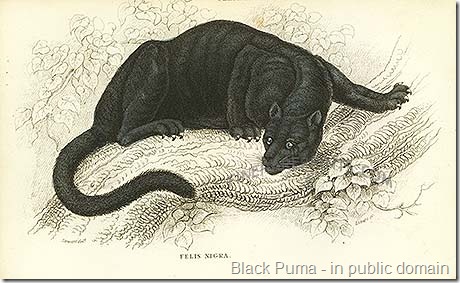 This print tells us little to be fair as at the time it was made artists had less of a grasp of scientific accuracy not having the benefit of  the photograph. They tended to anthropomorphize wild cats.

The black panther is featured in literature including The Jungle Book By Rudyard Kipling:

…”There is no one in the jungle that knows that I Bagheera carry that mark – the mark of the collar; and yet, Little Brother, I was born among men and it was among men that my mother died –  in the cages of the King’s Palace at Oodeypore. It was because of this that I paid the price for thee at the Council when thou wast a little naked cub, Yes, I too was born among men I had never seen the jungle. They fed me behind bars from an iron pan till one night I felt that I was Bagheera the Panther and no man’s plaything and I broke the silly lock with one blow of my paw, and came away; and because I had learned the ways of men, I became more terrible in the jungle than Shere Khan. Is it not so?”

“Yes,” said Mowgli, “all the jungle fear Bagheera – all except Mowgli.”

“Oh, thou art a man’s cub,” said the Black Panther, very tenderly; “and even as I returned to my jungle, so thou must go back to men at last, – ; to the men who are thy brothers, – if thou art not killed in the Council.”

“But why –  but why should any wish to kill me?” said Mowgli…