This painting, La Toilette by François Boucher (1703–1770), has a cat in it – of course! The appearance of the cat is interesting to me. But first a bit about the painting. 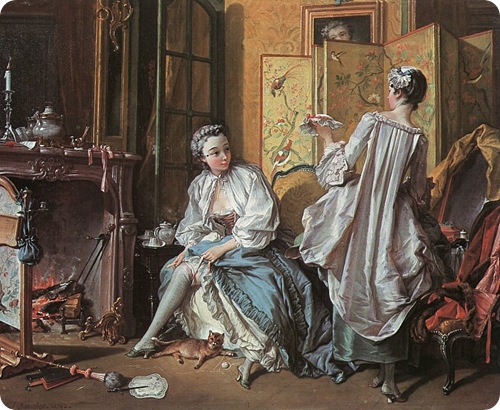 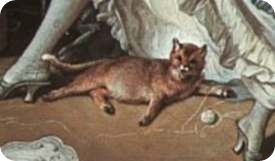 François Boucher was French (born in Paris). He painted in what is called the Rococo style. This was decorative and ornate. Frivolous perhaps and dare I say it not true art; more “two dimensional furniture”. But it was technically very proficient (except for that cat!). His themes were classical. His patron was Madame de Pompadour. He was a celebrated painter.

The picture is of a young, attractive lady getting dressed after doing her toilet. The year is 1742. It was a pretty ordinary year. There was the odd war going on in some far flung country. Not that different from today, really. This lady’s mind is on more immediate things; what hat to wear when she goes for un café dans la Rue de Rivoli. She has a maid who carries a hat, “what about this one mademoiselle?” The lady is tying up her silk stocking with a pink ribbon. The fire is on and there appears to be a coat of sorts to the right on the back of a chair. The air is chilly – it is not summer then.

About the cat. This may change the course of the cat fancy. The cat fancy (breeding and showing purebred cats) started in the late 1800s in England. This little cat, though, looks like a purebred cat or without getting too adventurous could be a purebred. It looks remarkably like a rather average depiction of an Abyssinian cat (the foreleg juts out at an unnatural angle). Today, the Abyssinian show cats are much more lythe and are of “foreign type” (a cat fancy term meaning elegant and slenderish in body conformation).

This little cat (which looks too small unless it is a kitten but it doesn’t look like a kitten) has the classic ticked golden coat of an “Aby”. Is this cat pregnant? Just speculating. Here is a modern Abyssinian cat photographed by Helmi Flick: 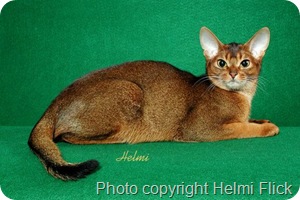 Yes, the ears are larger but these have been bred to be like that as has the modern lythe look. Breeders in America like large ears on their cats (unless it is a cat breed that demands small ears, the Persian, or flat ears, the American Curl, for example)!

So lets have some fun speculating. The accepted history of the Abyssinian cat in the west states than the first cat was imported from Abyssinia (Ethiopia) into England in around 1870 by an army officer fighting abroad (see a post on the origins of the Abyssinian cat). The Abyssinian could have originally been a jungle cat/domestic cat hybrid from the west coast of India by the way.

If this wild speculation is correct then the first Abyssinian cats were imported into the west much earlier and this is quite possible because as mentioned there were a number of wars rumbling on in far flung lands. Could it have been another soldier, a French soldier, god forbid, who brought this cat back from Ethiopia?

Such a cat would have been rare; just the thing for a rich young lady as a companion.

From Boucher La Toilette to Cats in Paintings