All the photos bar one were taken by siwild (Smithsonian Wild). The photo of the African golden cat was taken by Phil Henschel in 2002 (Panthera Cats on Flickr).

I spent a bit of time improving the photographic quality and framing of these photographs as allowed under the creative commons license. Of course visitors are free to download the adjusted images for their own use provided the original license is adhered to.  That is, they are free to be used under the existing license which you can see when you click on the above links.

The pictures below are thumbnails. If you click them you are taken to a large format version and some more text and a link.

Leopard Cat. This photo taken in China. The leopard cat is distributed across large parts of Asia. 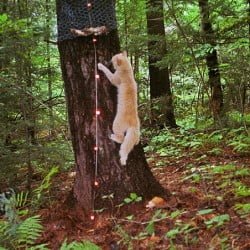 Jaguar on the Prowl

Camera traps capture the cat in a way that conventional photography cannot. You have a sense of the what it is really like for the wild cats.

There is little or no composition. The photographs are not about making a beautiful photograph. However, they can have a certain sort of beauty due to the raw wild feel of these photographs. Most photos of wild cats are of captive cats. Often these cats look bored. The brain has been dulled. When you look at the expressions on these cats you see a very alert cat. Wild cats are considered to be smarter and more alert than domestic cats because they have to use their brain more to survive.

Camera traps are used to record movements of wildcats and as part of a counting process. It is difficult to count the numbers of wild cats. For rare endangered species it is important to track population sizes. Mistakes have been made, usually on the optimistic side.

PoC has made charitable grants to the Smithsonian Institute.