The Turkish Angora is an important breed of cat. It is a natural breed. “Natural breed” means that it was not created by people until cat breeders started to breed the cat around 1900. It is one of the first cat breeds and the first longhair cat breed in Europe.

It may also be linked to the creation of the Turkish Van, another cat breed. An important point to make is that people are not sure about the history of the cat breeds. Sometimes the names and histories get a bit mixed up. In old books and in titles to paintings you will see people writing about “Angora cats” that came from Angora. Are these Turkish Angora cats? They look like them. In Turkey today, people who know this cat breed well call them “Angoras”. And Angora is an old name for the capital of Turkey, Ankara.

Kids should always be cautious when writing about the history of the cat breeds. 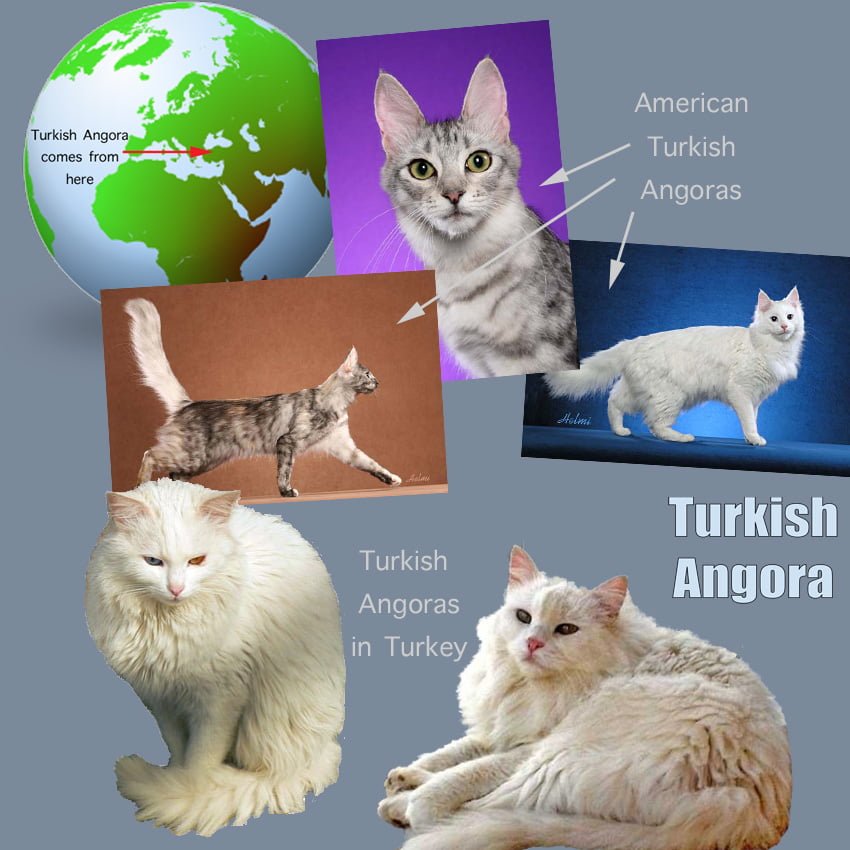 We are told that this beautiful cat comes from Ankara in Turkey but please read the comments which are written for grown ups. If you have a question please leave a comment yourself and it will be answered.

This cat was certainly living in Turkey about 600 years ago. In fact its history in Turkey is probably much longer than that. It was brought to France and Britain about 400 – 500 years ago. There are European paintings of Angora cats from about 300 years ago.

The cats that were brought to France and Britain were real Turkish Angoras but they were “street cats”. People call them moggies because they are not purebred by European and American standards. However they are still pure Turkish Angoras. You will see the same cats in Turkey today at Ankara Zoo which are looked after by the Angora Cat Association.

In the United States the Persian cat became very popular and the Turkish Angora almost disappeared around 1960. Once again Turkish Angora cats were brought in from Turkey to get the breed back on its feet.

Today the Turkish Angora is accepted by cat clubs in America but there are only a few breeders. In the UK this cat breed is not accepted by the most important cat club, the GCCF. Despite being fairly rare this is a popular cat breed. It should be more popular because of its beauty and long history.

How The Turkish Angora Looks

This is an interesting topic. This is a semi-longhaired cat. It is medium in size. It weighs from 6-11 pounds (2.5-5kg).

The cat clubs in America say that the cat should be slender. They describe this as “foreign”. The ears should be large and wide at the base of the ear. They should be positioned high on the head.

In Turkey this cat looks more like a white traditional Persian cat. The look is quite different to the cats in America.

People who know this cat breed say the cats are friendly, easygoing and intelligent cats. They have also been described as quick and energetic.