People search for “cat climbing trees”, although I am not quite sure why – uhmm..I think it is because they are looking for cat furniture 😊. Or it might simply be an interest in the superb agility of cats as expressed in tree climbing. Or it might be about how to stop their cat climbing trees because it can look a bit scary to us to see our cat 30 feet up a tree and sometimes (rarely) unable to get down. More on that below. In playing safe, therefore, I have linked this subject with cat anatomy, the wild cats and our domestic cat companions in pictures and words.

Both wild and domestic cats are vertical movers. Humans are used to moving horizontally only, but for the cat their world is much expanded because they can go upwards which is something they enjoy and indeed need to do. Why do cats like to move vertically? Ultimately, there can be only one reason: survival. They can escape predators who are more or less fixed to the ground such as wild dogs. And the leopard stores their food in trees to protect it from scavengers. And lions sometimes sleep in trees to escape the flies and for security. Some wild cat species have become so adept at climbing trees that they almost live in them. They do their hunting in them and the tree has become their home. 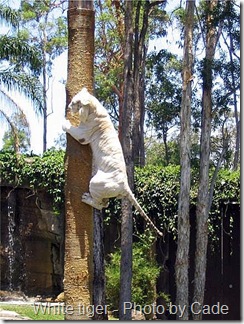 The cat’s sense of balance, powerful hind quarters, extremely flexible back, long tail – in specialist tree dwellers which aids balance – and claws to grip, all contribute to making the cat a skillful climber. This is in addition to its skills in jumping, stalking and running.

Perhaps the most outstanding example of flexibility in the cat’s back which aids athleticism is demonstrated in the cheetah. However, this flexibility is used to increase speed in this instance and not climbing ability as the cheetah is a ground-based cat (see cheetah speed). The cheetah also has a long tail, which aids balance at high speed when changing direction as it must to catch agile prey. One last thing about the cheetah: this cat’s claws are permanently out, to aid grip when moving fast. The long tail is very apparent on two large wild cats and one small wildcat. In all cases it is long to act as a counter balance much like a high wire performer uses a large pole.

RELATED: Cats That Live in Trees. 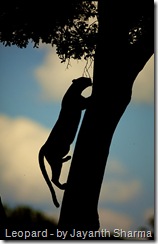 There are wild cats that are exclusively forest dwellers and tree dwellers and the best of them all are margays, a small but highly adapted and agile wild cat of great charm that thinks it is a monkey!

So well adapted are they to life in the large trees of virgin ancient forest that they not only have long tails but are the only felid, with the clouded leopard, that has extremely flexible ankle joints, which can swivel through 180º. This allows for rapid changes in direction and movement up and down trees. In other words, they can come down trees head first. Talking about a cat climbing trees, this is a cat descending trees and very rapidly (my now deceased Norwegian Forest Cat could do that too by the way, without swivelling ankles 👍). Margays typically sleep 23 feet off the ground in their trees. Margays can be domesticated if hand reared.

One of the great dilemmas of the domestic cat, is if they are tree climbers, or if they get the chance to exercise that skill, to get them down if they are unable to do so unaided. Without flexible, swivelling paws, they have to shimmy down backwards allowing their claws to grip. They are not good at going into reverse.

Sometimes they are stuck high up demanding to be rescued or they fall and when they do, we know that they have a high chance of survival if they have sufficient time to right themselves and float down with limbs and body outstretched in the gliding flying squirrel position (see cat falling).

The all-American cougar (puma or mountain lion) uses its tree climbing ability to escape dogs when being hunted by people, where it is promptly shot 😢.  Few other animals have the cat’s ability to climb and for that reason escaping up a tree is the best route for a cat, wild or domestic, when preyed upon.

Of the big cats, the lion is a worse climber than the tiger. The leopard has the extraordinary ability to drag huge carcasses up trees, a demonstration of its superb climbing skills and strength and it is said they can climb the highest of trees and come down head first. The lions of Lake Manyara, Tanzania, are tree climbing and sleeping lions.

A cat climbing trees uses its superb and sophisticated sense of balance which plays a big role in addition to the other attributes mentioned. 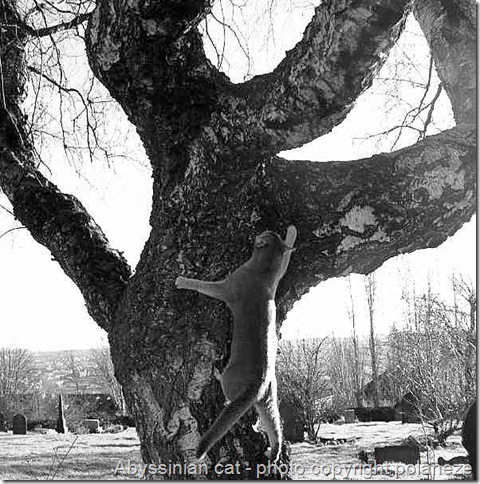 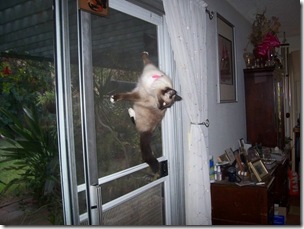 There is no doubt about it, though, that our cat companions, when given the chance, can show off their tree climbing skills. My Missie could race up and down a tree despite being an indoor cat most of her life.

The domestic cat has all the attributes of its wild cousin except for the specialist adaptations referred to. The strong musculo-skeletal frame has evolved to:

Feline muscles are more flexible than those of other animals, which gives the cat a great range of movement1. Muscles only contract and there are three types of muscle tissue:

A cat’s muscles mainly consist of the first type. A cat has little stamina and its body temperature will rise in less than 60 seconds of sprinting so that it has to stop1. Many cat-climbing-tree-escapades start with a vertical jump. This is carefully worked out by judging distance and calculating the power required. The extensor muscles of all four legs operate at the same time to propel the cat. All four paws leave the ground simultaneously.

Sometimes, when the jump has to be inch perfect you will see the cat sway its head from side to side. It will also do this when staring at prey and about to pounce. This action is using its binocular vision to maximum effect to check the precise distance. Other predators employ the same technique. The subject matter of the gaze is displaced by the head sway allowing judgement to be enhanced2.

1. Encyclopaedia of the Cat by Dr Bruce Fogle

Note: this is a refreshed and slightly adjusted page from around 2009. It has been republished as at Jan 9th, 2022. Pages need to be brought forward sometimes.