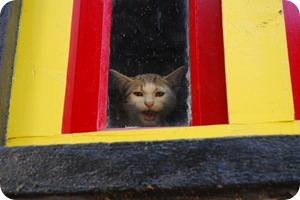 Cat Sounds WAV WMA MP3 is about cat sounds in the audio file WAV format plus other audio file types of cat sounds. If the file extension is “.wav” they are files in the waveform audio format. They are also known as Audio for Windows and the file type is a Microsoft and IBM audio file format.

Firstly, I’d like to present some audio files via an audio player that works on PCs and MACs. They are various domestic cat sounds. Below these are many more sounds. There are also two links immediately below to jaguar and ocelot sounds..

I think the first thing to note is that cat vocalizations are work in progress. One of the best books on the subject1 is not complete in my opinion. What i mean is that it does not include a discussion about the nuances of the domestic cat vocalisations. It is not just meows and hisses etc. Domestic cats produce a wide range of intermediate sounds.

How far can and do we go when communicating with our cat? The above video contains audio files as well to get over the problem of playing audio files on incompatible computer software. Videos play on almost all computers.

The forms of vocal communication are listed below. Different species of wildcat use different sounds. The domestic cat also uses some of these sounds. The hiss is described as a “nonvocal sound”1.

These audio files can be tricky to play because audio formats are a pain in the bum to be honest. It depends on what software you are running and that depends on Windows or Mac. Sorry but I can’t do much about it.

Cat Sounds WAV WMA MP3 — The first batch of files are in the WAV format. For WAV files: The files are downloadable so you can then upload them to your own

Right click on the text link and select “Save Link As…” (see image below). A download window will pop up and you can select the destination for the file to be downloaded. If you left click on the text link you will be taken to a new window and a Player where you can play the audio file. If you use QuickTime Pro you can then save the file from the player.

WMA – Cat Sounds WAV WMA MP3 – The next batch of audio files are in the Windows Media Audio format. WMA, was conceived as a competitor to the popular MP3 and RealAudio codecs. They are for windows run computers (PCs).

For WMA files simply click on the link and if you use a windows operating system the standard download mini-window will appear asking if you want to play the file or download it.

If you select to play it your default player will run, which is probably windows media player. You can select another player if it is available on your computer. This is how it will or should look:

You can can covert audio files online and download the new file type. The best site for this in my opinion is: online-convert.com

Ocelot greeting – the ocelot is a small wildcat. The greeting is strange and unnerving.

Tiger Roar – this is a link to a new page on this subject.

Sand cat spitting hissing – this is a strange click (the spit?) then hiss that are merged. The click is not a sound recording defect but part of the hiss.

Mountain Lion Sounds – this is not a link to an audio file but to a new page about the sounds that the Puma makes.

Cat in Heat – Cats make a range of sounds in heat but this is one of them when she calls.

Cat Chattering – classic chattering at a bird. The cat is instinctively practicing the biting motion that takes place when prey is caught which breaks the spine of the bird at the nape of the neck.

Domestic cat growl – your standard growl, which is usually followed by the hiss.

Domestic cat hiss – the standard hiss designed to mimic the snake to frighten an adversary.

Caterwauling is a term that seems to be used to mean slightly different things to different people.

Caterwauling definition
1.To cry or screech like a cat in heat.

2. To make a shrill, discordant sound.
3. To have a noisy argument. {Free Dictionary}

Caterwauling has been described as the the male cat makes when sexually excited, sometimes as a prelude to a fight over a female. The book Wild Cats Of The World explain caterwauling as loud long distance calls intended to bring cats together for mating. For the American bobcat they can be heard about a mile away. Cat Sounds WAV WMA MP3

MP3 – Cat Sounds WAV WMA MP3 – The next batch are MP3 audio files. In terms of downloading the file the same procedure as for the WAVE files applies. These are PEG-1 Audio Layer 3 files. They are highly compressed which translates into smaller file sizes.

They can’t be played (as far as I can see) by Windows Media Player probably because they were a competing audio format but Apple’s QuickTime Player will play these files once downloaded.

The image below shows what the player looks like. The software is a free download from this site: (opens in a new window).

More about the sounds the bobcat makes on this page: Bobcat Sounds. I will be building a fresh Bobcat soundboard in the future. The old one has been changed by soundboard.com. I need to create a new one (date 24th July 2012). In the meantime here are some jaguarundi vocalisations:

Simon, Able Seacat, as many know, was a very courageous black and white ships cat during the Yangtze incident in 1949.

There are a couple of articles …