God forbid that a cat falls from a high place but they do sometimes. Unsupervised cats on balconies can fall. People don’t believe they ever will.

The further they fall, in some respects, the safer the cat. The cat reaches a terminal velocity that is relatively slow: 53 mph. Cats can and do survive these falls at this speed, landing, as they do, on their feet. They might suffer the odd break or fracture. Chins tend to get fractured.

By contrast a human falling with normal posture reaches a terminal velocity of about 120 mph, well over twice the speed. Humans are almost invariably killed in falls of 35 feet or more. I am guessing the height. 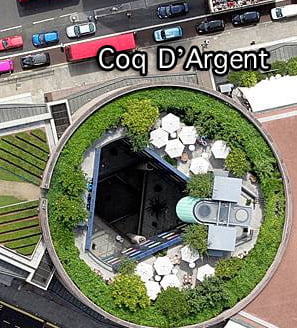 There is a restaurant in London that is known for suicides: Coq D’Argent in the city. It is 80 feet up. People just drink some wine and walk over the edge in front of everyone. A cat would almost certainly survive these falls. Probably just sprint away after touching down.

The much reduced velocity is due to the obvious. The cat splays out his legs and fly almost like a flying squirrel. The splayed fury legs and body form a crude parachute with air friction. There is some loose skin between leg and body which creates an air brake. The self-righting mechanism means a cat always falls down perfectly upright and in a controlled way.

The video shows a cat falling 25 metres or about 75 feet. He touches a branch on the way down that throws him off balance a bit but he was OK.