My cat and I have just endured 30 minutes of the noisiest fireworks I have heard in a long time. It must have been a firework display at a local club about 500 yards away (as the crow flies). The loudest of the modern fireworks go off like bombs. The windows rattle. I feel I am in a war zone here in Central London. I couldn’t even watch TV. I did this post instead!

Charlie, my cat, is in terror of the window shattering firework bombs that make a dull and shocking sound. He is scuttling around the apartment looking for somewhere to hide. At first he came to me on my bed and cuddled up on my lap.

Then he moved again and again in search of some sort of respite, a hiding place from the scary eardrum busting blasts. He has that look of terror on his face, which I hate to see. 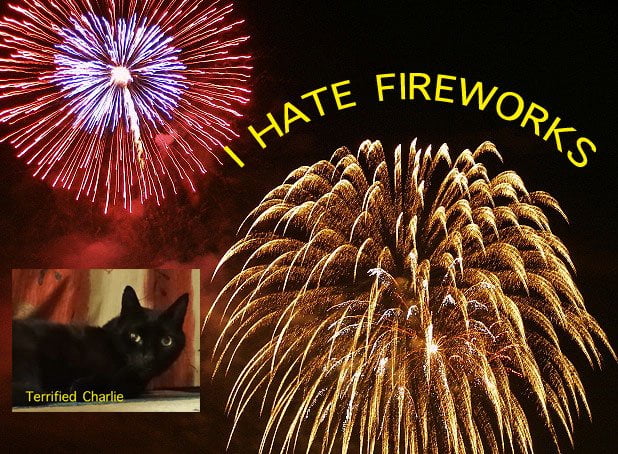 When fireworks are this loud and close by I think the people who put on displays are creating a public nuisance. They are also inadvertently abusing domestic animals. I know the word “abuse” is harsh but if you watch a cat terrorized by fireworks for half an hour I think abuse is about right.

I have come to believe that fireworks are a nuisance and no one who puts on displays seems to have a regard for domestic cats. In places like London where people live close together almost any firework display is going to be close to homes. That means lots of scared cats.

And what of cats that are outside? Are they going to run away or do something silly and dangerous?

My personal view is that there should be some sort of accountability. These people don’t have a regard for others. Perhaps they think that everyone in the area can watch the display for free and aren’t we lucky. A lot of people don’t like fireworks. And all cats hate them. Cat are also confused by the noise. They don’t know what to make of it. I say to him it’s just people being people.

In Britain firework displays take place well before Guy Fawkes Night (Bonfire Night) on 5th November. Sometimes you might hear them a fortnight before the 5th November. And regularly from then on.

I know there is probably nothing anyone can do about this perennial problem. I just feel there should be a bit more concern for the animals. I don’t think it is wise to try and pick a cat up under these circumstances. It is best to let him find his safe place and make some comforting sounds and perhaps stroke him until it is over.