The cheetah is built for high speed over short distances. It is similar in size to the leopard but much slimmer and more rangy. The cheetah has a deep chest and lanky legs. The tail is long for balance but about one half the body and head length. The background colour varies from “tawny to grayish-white to bright rufus fawn”1 but is generally yellow with white undersides. The photograph by Martin Heigan below shows the solid black spots that are evenly spaced throughout and unique to each cheetah. The texture of the fur is said to vary. The spots are soft and the background harsher to the touch…more below pic. 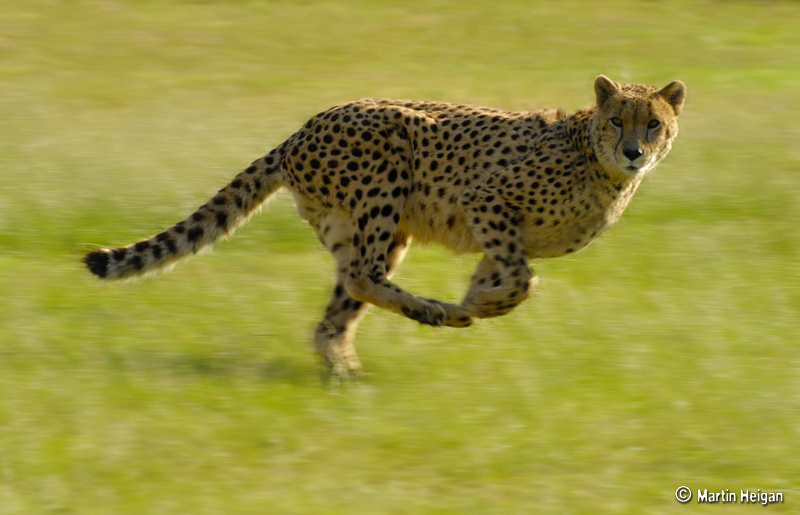 Cheetah Speed and cheetah description are bound together because this wildcat has many anatomical adaptations to increase speed that alters its appearance and function. Adaptations
for speed require special focus when describing the appearance:

See cheetah speed for more on why this cat species is the world’s fastest land animal.

The fur is short except at the nape (the back of the neck) and shoulders, which is a mane of sorts – a vestige from when an adult was a cub. The whiskers are short too. Whiskers in domestic cats are important but less sofor the cheetah. The tail is spotted with the last third sometimes banded. As is the case for some other wildcats, melanistic or black cheetahs have been rarely seen. There are records of partially albino cheetahs and white cheetahs. A white cheetah has blue spots on a “whitish-blue coat”1. The king cheetah (Acinonyx rex) is a cheetah with a slightly different pattern caused by a recessive gene that produces what cat fanciers call a “blotched tabby” pattern or classic tabby pattern. They are rare cheetahs and found exclusively in Zimbabwe, Botswana and the Transvaal. Read more on the king cheetah.

The skull has a broad “highly domed forehead”. The skulls bones are thin and light in contrast to that of the lion and tiger. As a result the muscles are short resulting in a reduced bite force. The cheetah kills by strangulation using the throat bite and its teeth are not ideally made
for a bite to the spinal cord or neck bite. There are two noticeable dark lines running down either side of the face. The function might be to reduce glare into the eyes.

Source: Wild Cats of the World by Mel and Fiona Sunquist pages 19-34.