The Cheetoh cat is a created breed, a cross between the Bengal cat (great pictures) and Ocicat (more fantastic pics). This is a relatively large, gentle and wild looking cat. Bengal cat breeders like the wild look. The Bengal cat is a wild cat hybrid, a cross between the Asian Leopard cat and a domestic cat. While the Ocicat is “a three way hybrid interbreeding a Siamese, an Abyssinian and an American Shorthair to produce a domestic jungle cat”. So the wild blood in the Cheetoh comes from the Bengal cat side (the Asian Leopard cat).

The Bengal SBT (4th generation) has about 12.5% wild blood so the Cheetoh, on the face of it has little wild blood but that doesn’t stop this cat looking nice and wild while being thoroughly domesticated. Wildcat hybrids have a greater tendency to play fetch as shown in the video. 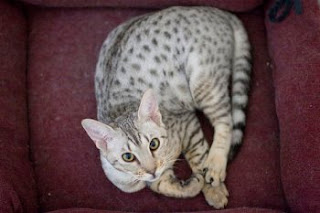 The coat is a spotted tabby cat coat (see cat coats tabby). Their size is bigger than average at about 15lbs + for the males (see domestic cat size). The CFA won’t recognize domestic cats with wild blood so this rare cat is registered with TICA as an experimental breed and with the less well know cat association, the United Feline Organization (UFO) (recognized in 2004).

As mentioned, the Cheetoh cat is noted for its nice temperament, intelligence and wild cat appearance. The cat on the right photographed by pawsforportraits demonstrates the traits nicely. His name is aptly, King Louis. He looks very regal indeed.

As the breeding is quite involved here is a schematic: