The Chinese mountain cat is more commonly named the Chinese desert cat, although it is a little misleading as habitat is mountainous terrain. However, little is known about this rare wild cat which is one the wildcat species, a relative of the Scottish wildcat. Due to fairly recent genetic analysis by Driscoll et al in 2007 it has been scientifically classified as a subspecies of the wildcat and given the scientific name: Felis silvestris ssp. bieti. This wild cat species was first recorded in 1889. It “lives in the alpine meadows and scrublands of the northern edge of the Tibetan plateau in China” (Small Wildcats by Samantha Bonar). Note: this page has been refreshed as at Jan 10th, 2022. If you can add information please comment. It would be welcome.

Its coat is grayish-brown with lighter undersides and it has a thick, bushy and banded tail. It sleeps in burrows during the day and mainly hunts rodents and the Pika ‘rock rabbit’ at night and at dusk and dawn. Prey also includes birds. Rodents are poisoned by people which destroys this cat’s prey and it is also hunted for its fur. This threatens survival in the wild. Accordingly, it is classified as Vulnerable by the IUCN Red List of Threatened Species™.

RELATED: Picture of female Chinese mountain cat and her kittens in the wild

The photograph immediately above of the Chinese mountain cat above is copyright Jim Sanderson Ph.D – please respect copyright. Jim Sanderson is a small wildcat specialist and he and Tibetan assistants obtained this rare picture of this wild cat species from a camera trap near the remote village of Rongrah. They chose the spot for the camera having heard stories of a sighting by villagers. The pictures are shown here with the permission of Jim Sanderson. Jim works with the Wildlife Conservation Network and he led the team of people who organised the capturing of this rare photograph.

In recognition of Jim’s generosity and commitment in helping to research this rare wildcat I have donated $50 to the Wildlife Conservation Network (see Pictures of Cats org Donations), with the suggestion that it be used to further support research into this cat.

This cat is between 27 and 33 inches in length (excluding tail) plus a tail of between about 11 and 16 inches. As to weight, this ranges between 10 and 20 lbs (4.5 to 9 kgs), which puts it in the same size range as the largest of domestic cats. It is said to be about twice the size of the average domestic cat by the Sunquists (Wild Cat Of The World).

The cat’s fur is sand coloured as can be seen in the picture. This is a brown tabby cat in domestic cat language. The fur is ticked with longer dark brown hairs. The tail is very thick with distinctive, dark rings towards the end of the tail. It is tipped with black.

The toes have tufts of fur growing between them presumably to provide protection against climate conditions. The chin is white and there are brown stripes on the cheeks of the cat heading this page.

This cat species first came to our attention in 1889, apparently, when members of a scientific expedition discovered it. The discovery, though, was not of a live cat but skins on sale. Plus ca change. It is felt that the Chinese mountain cat is related to the better known jungle cat, sand cat and Eurasian wildcat.

RELATED: Picture of female Chinese mountain cat and her kittens in the wild

The primary prey of the Chinese desert cat is rodents (90% of prey), pika (see below) and birds including pheasants make up the remainder.

Jim Sanderson says that, “Pandas…are very well protected by Chinese law, but there is virtually no protection for this cat…. There’s no interest in its conservation because it’s poorly known, but now perhaps this will change.” (src: National Geographic News)

Apparently, the Chinese mountain cat is protected in China but is poisoned by people either through reckless use of poison to kill its prey the pika (see below), which also endangers survival through loss of prey. 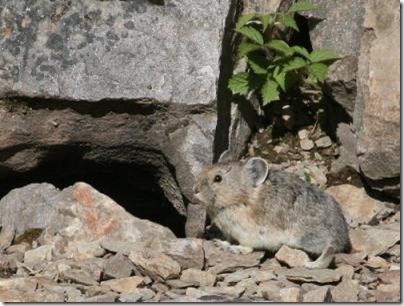 Pika, the prey of the Chinese desert cat. The Pika is also called a ‘rock rabbit’ and is the smallest member of the rabbit family. Photo by DavidQuick

The IUCN Red List for Threatened Species™ list this cat as a subspecies of the wildcat and classifies the cat’s status in the wild as Vulnerable. This may be somewhat of a guesstimate as population numbers and densities are not adequately known it appears.

This cat’s fur is prized, which is another reason that makes it status vulnerable. 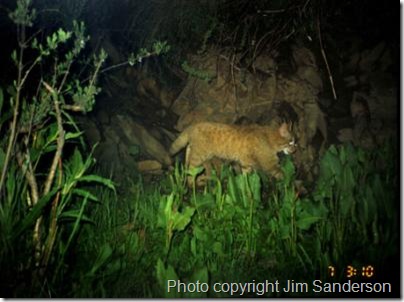 Habitat of the Chinese mountain cat is mountainous terrain, montane forest, alpine meadows, semi-desert and loess hill steppe. It has been recorded at elevations of 2.8 to 4 thousand meters.

The picture heading this page was taken in Sichuan Province, China at about 12,300 feet above sea level (3,750 meters) on the edge of the Tibetan Plateau.

The above map shows the rough range of the Chinese mountain cat and is quite unspecific because the distribution of this rare wildcat is not known accurately. The blank map is by Wikimedia Commons.

The cat’s thick fur indicates that this cat lives on high ground. Here is a map of the area where the photograph was taken: 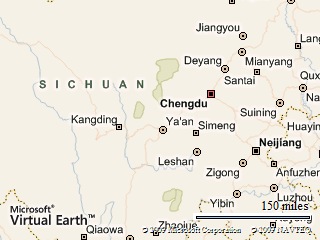 Sichuan Province is in the west of China near Tibet. I suspect the terrain to be quite harsh. The rock rabbits (its prey mentioned above) will tell us a bit about the habitat of the Chinese desert cat. The Pika lives in cold climates. “Most [Pika]..live on rocky mountain sides, where there are numerous crevices to shelter in, although some also construct crude burrows” (src: Wikipedia). The fact that this cat’s name is also Chinese Desert Cat also gives clues as to the barren terrain.

Perhaps the height at which this cat lives is an indication as to intrusive human activity, but that is speculation on my part.

I wrote this about 10 years ago and republished it in 2017. Since then, a video has become available. Here it is:

Photo of Pika: published under a Attribution-NonCommercial-NoDerivs creative commons License — this site is for charitable purposes in funding cat rescue.