Clowder of cats. Image in the public domain.

A clowder is a group of cats in the same place1 (see the picture above). I was prompted into researching the word by Shelley, who posted this article recently: I love ferals. The interesting thing about this old fashioned and rarely used word (I presume that it is not obsolete) is its origins – what are they? In finding out I also bumped into another interesting word, “kindle”. The word would be used like this: ‘I saw a clowder of cats in the shade’. It would seem that this word has been superseded to an extent by the word “colony” (in reference to colony of feral cats) as it would usually be used in reference to feral cats, it seems to me. 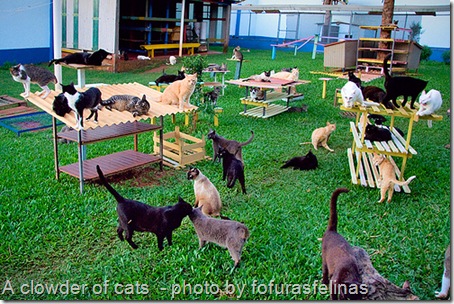 The word clowder was used more in the past. Here are a couple of examples from some books (now in the public domain) from the early 1800s in Britain. You can also see the variation in the spelling of the word “kindle” (kendel of young cats): 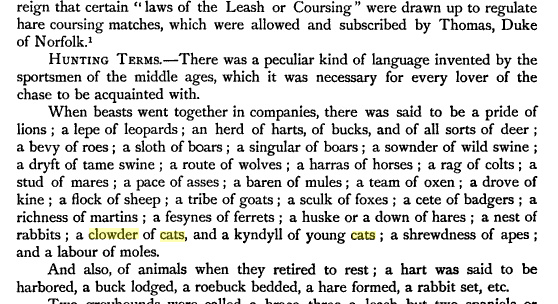 Above: The sports and pastimes of the people of
England from the earliest period …By Joseph Strutt – 1801

Above: The Monthly review By Ralph Griffiths
George Edward Griffiths – 1802

An entirely different source5 says that the word originates from the 15th century in reference to “clouder” and then later “crowder” in the book of St. Alban. This word meant crowd, cluster, clotting or coagulating. There is a town named after St. Alban called St. Albans about 20 miles north of London, England.

Other terms, which have similar meanings are: pride of lions, a colony of ferals cats and a kindle of kittens. As can be seen from the extracts of old books the word “kindle” has been spelled in various ways: kyndyll, kendal, kendel. Kindle today more often means an electronic book. Kindle also means to call forth or to catch fire6. I could not find any reference to the word “kindle” as meaning a group of kittens except at About.com (this website was closed) and in the old books above.

Note: this page has been checked, added-to (minor adjustments) and republished at Jan 26, 2022.

From Clowder to Cat History