Time NewsFeed is currently presenting “The 15 Cutest Endangered Animals in the World” in photos. Two of them are small wild cat species, the sand cat and the Iberian lynx. The sand cats that are featured have ‘charmed the Internet’. I don’t see cats in captivity as charming. I see attractive wild cat species in captivity when they would be better off being in the wild. Maybe I am missing something. 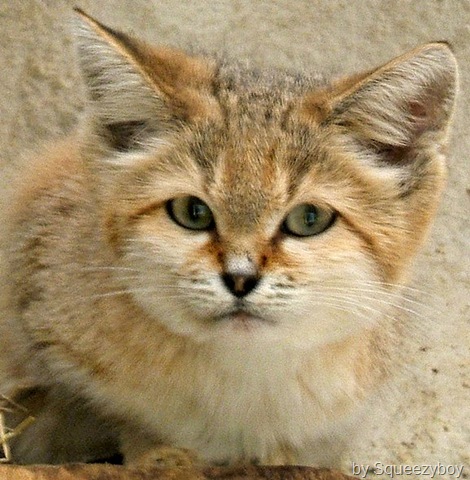 I just felt compelled to complain about the title that is misconceived in my opinion. The words ‘cute’ and ‘endangered’ should not be in the same sentence in this way. The former is part of the internet fad of cute cat pictures and funny cat videos and that sort of stuff. It panders to people who don’t really respect the cat or animals. The latter is about serious science and profound issues that go to the heart of what we do on the planet for the future.

The Time article is cheapening serious issues. It really is another form of dumbing down. How dumb have we got to get? How endangered has a species got to be before something that works saves the species from extinction in the wild?

There are other things that are shallow and wrong about the Time article. They show sand kittens and Iberian lynx cubs all of which are in captivity. Wild cats do badly in captivity. A lot die young and are sterile. They are often inbred because the gene pool in narrow. This creates health problems. Not to mention the whole negativity of keeping wild cat species in cages. These animals have large ranges. The sand cat can travel about 6 kilometers per night when hunting in the wild. How does it feel to be in a cage 20×20 feet? Nothing cute about that for me.

Also the sand cat might be cute looking – this cat species looks like a domestic cat, and particularly a traditional Persian cat – but when bred in captivity they are more aggressive that wild caught animals. You can’t really be ‘cute’ and aggressive at the same time. And anyway what is the point in being extinct and cute?

Also there is nothing cute about the reasons behind the gradual extinction of these two small wild cat species. The Iberian lynx has been hunted in the past and its prey also hunted even when the cat is critically endangered. That is callous and stupid, not cute.

Another thing needs to be mentioned. The more attractive an animal is the more likely it is to be endangered because people like to possess parts of attractive animals (e.g. it skin) or possess the entire living animal as a pet (e.g. lynxs and ocelots). This is another reason why it is inappropriate to use ‘cute’ and ‘endangered’ in the same sentence unless making the sort of statement I have made.

YouTube does a lot of dumbing down too. There are piles of stupidly plain rude comments under sensationalistic videos. Serious and important videos just don’t succeed on YouTube. A classic example concerning cats is the short video of the female snow leopard with her cubs in a den. This is unique and of no interest to 99% of YouTube surfers.

Google does its share of dumbing down as well. It finds and ranks highly the most flimpsy of articles on serious subjects while good material is sometimes buried in the graveyard of unseen web pages.

Fortunately PoC does fairly well in getting noticed. But it takes effort. And it is like swimming upstream sometimes. It is time for people to get serious about serious matters and have fun and be lighthearted about appropriate things at appropriate times.