Don’t do DIY declawing. Don’t even begin to dream about it. Declawing is bad enough when carried out by a vet. Even they screw up, which compounds the immorality of such an unjustifiable process.

However, it appears that one idiot, Eric Felipe Gaskin, living in the District of Columbia was so driven to declaw his daughter’s two eight-week old kittens, Simba and Pumba that he decided to do it himself. Perhaps he thought he’d save a few bucks.

You have probably read about the outcome. He crushed and ruined the kittens’ paws because they struggled to get free and he continued. They couldn’t walk and the damage could not be repaired by emergency vets. They were euthanised. Let’s not dwell on the horror and sadness.

I have not learnt who reported him to the police. It would be interesting to know who did it – his wife?

Fortunately, he has convicted of animal cruelty (a felony – a serious crime) by a DC criminal court. His sentence included 180 days imprisonment and being banned from keeping pets for 3 years (no where near long enough, as far as I am concerned). He has to have a mental health assessment!

This is surely the most grizzly example of:

Perhaps he has a drink problem? I have no idea. The reason why I suggest this is because it is unbelievable that a sane person could try and do what he did unless his mind was unbalanced. Or he was just so conditioned about treating animals as objects and so conditioned to believing that declawing was acceptable that he saw no problem in doing it.

In fact, he seems to be one of those individuals who believes that declawing is cutting off the claws. It is not, although that is bad enough. To anyone else who has the same misconceptions, this is what is removed… 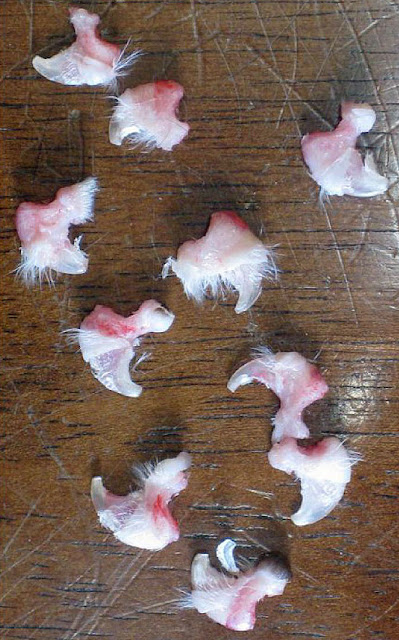 Declawed cat’s bone and claws. Click on the picture to go to a post. This picture is protected by copyright.

I suppose we won’t know the outcome of his mental health assessment. However, the fact that he was tried for animal cruelty and the judge also sentenced him to:

..indicates that he is not deranged. Accordingly, I have to conclude that Gaskin is a evil monster who should be banned from keeping animals for the remainder of his life. Oh..and maybe someone should take a Stanley knife to his fingers.