Yes, this page starts off with the fact that dogs smell signs of cancer and seamlessly slides into cats…! And back to dogs again. The rules of social interaction are very similar and overlap so perhaps we in the cat world can learn from the dog world and vice versa.

A dog’s ability to smell cancer comes from the dog’s extraordinary sense of smell. This page, The Cats Nose, compares cat, dog and human senses of smell.

“Our study provides compelling evidence that cancers hidden beneath the skin can be detected simply by [dogs] examining the odors of a person’s breath,” said Michael McCulloch, the lead researcher.

“Ordinary” household dogs can be trained, using standard food reward techniques, quite quickly (a few weeks), to detect the difference in the smell of the breath of a person with lung or breast cancer2. The accuracy rate is as high as between 88 to 97%1. The scanners in hospitals that cost many millions of pounds or dollars have an accuracy rate of 85 to 90%!

RELATED: Oregon woman gives credit to her shelter cat for being alive today after the family cat detected cancer 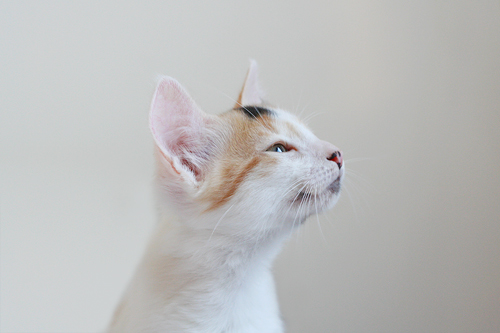 I can smell it in the air – photo

It isn’t just about the discovery that dogs smell signs of cancer. Dogs are amazingly useful in other ways thanks to their noses and other skills. They can be trained to alert people with heart conditions to an impending seizure or predict when an epileptic fit is about to occur. Studies discovered that some dogs licked a child’s face before a seizure or acted in a way that indicated a seizure was going to happen within the next five hours. Dogs are not only being trained to detect impending seizures but to deal with the aftermath in guarding the person and perhaps pressing an alert button.

Now, let’s not leave cats out. Cats, too, can sense epileptic fits. I am referring to a cat called Tee Cee (Yorkshire, England) who would warn his (or her) owner of a forthcoming epileptic seizure by staring at him.

It is not yet understood how cats and dogs can do this. Perhaps it is down to scent again or the person gives off behavioral clues. Some people think that it is down to electrical activity in the person’s body.

Update 14th April 2010: There is a story in the internet press about a cat called Honey, that detected her human companion’s breast cancer. The Tennessee lady had had a scan some time ago and the cat sat on her lap and pawed the area. The next day she spotted a bruise that would not go away. She had it checked out and breast cancer was diagnosed and treated promptly. Honey gets treats now – whipped cream, her favorite! You can make what you will of this but it is entirely feasible as cats have a very acute sense of smell as well as the dog.

Cats can forecast the weather too! Apparently in China it was thought that if a cat winked it was going to rain1. I am not sure about that skill. In Scotland a cat scratching a chair forecast gales. Ships cats were used to prevent bad weather. For instance, the ships cat was sent up the ship’s mast to scare away “storm demons” (this is more about human superstition than a cat’s sensory skills).

However, there is some science behind a cat’s ability to forecast weather. It is down to the cat’s whiskers or vibrissae that can detect changes in air pressure and the sensitivity of the inner ear, it is thought (see cat’s ear). Cats are also able to detect noises that are a precursor to storms1. Perhaps some people can do this too.

We have heard of a cat’s ability to detect an oncoming earthquake, well dogs can do this too, apparently. In fact, it probably applies to most animals. In the 1977 California earthquake a study discovered that 34% of the companion animals demonstrated odd behavior such as pacing, whining or being agitated before the earthquake. The hair of some cats stands on end before an earthquake (the reason is unknown). It was found that dogs that did react more had better sensitivity to high pitched sounds3. Small headed dogs have greater sensitivity to high pitched sounds. These dogs reacted more strongly to the earthquake. The theory is that the dogs can hear the rock underground scrapping together.

It is said that before the 2004 Tsunami that killed a quarter of a million people many dogs refused to go for a walk near the sea1.

I don’t know about visitors to this site but when I was working in an office and came home, my cat would go to the front door well before I arrived. My partner observed this. This may just be habit but my times varied. Is this some sort of telepathic power? One person, Rupert Sheldrake believes that cats can detect what he calls “morphic fields”. This is an unconscious psychological bond. He attributes the same phenomena to the reason why migrating animals return to the same breeding grounds yearly. A morphic field can extend to long distances. In a study4 it was found that almost twice as many dogs had this gift to cats.

The senses of dogs and cats are extraordinary. It isn’t just about the fact that dogs smell signs of cancer. Perhaps this will help some people to be more sympathetic towards these companion animals.