In 2009 I wrote that the endangered Bengal tiger in Nepal was heading towards extinction in the wild in that country. I was in despair and said that it was just one more sad, very sad, example of the general apathy we as a world have about the survival in the wild of our beautiful wild cats. Obviously not enough people care otherwise something would be done about it. But please see the update as at 2022 half way down the page – good news 😊..

A census between Jan and April of 2008 at the Suklaphanta Wildlife Conservation Park in western Nepal (formerly Royal Sukla Phanta Wildlife Reserve) indicates greatly reduced numbers of tiger. The World Wildlife Fund for Nature (WWF) estimates that, currently, there are less than 150 tigers in Nepal. The kind of numbers of tiger left in this park is down to levels (10 to 17 tigers) where the population is unsustainable surely as inbreeding will take place which will undermine health and kill off the remaining tigers — see map of the conservation park below:

We are talking about a “conservation park” where I presume the animals are “conserved” and therefore protected but sadly it is all a pretense. Big cat populations worldwide have fallen by 95% over the last century and are heading to extinction in the wild. The park rangers are outgunned and out manned by the poachers who, driven by fantastic financial gain in supplying the Chinese tiger body part market, are gradually eradicating this magnificent animal from so called protected parks. The worst of it is that the people who are meant to do the protecting, the rangers or police, call them what you like, are on occasion the poachers too. Corruption and the idiotic idea that the parts of a tiger can do something for us, is at the root of the endangered Nepal tiger. 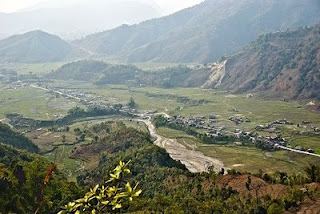 Clearly action was taken by the Nepalese government in the nick of time.

This page has been added-to, checked and republished on January 6, 2022. The page needed an update anyway because it’s about conservation and matters of conservation require continual updating because it is a constantly changing situation.

I’m told that as add 2018, there were a 220-274 Bengal tigers in Nepal. The tiger population in the Terai of Nepal is fragmented into three isolated subpopulations. They are separated by cultivation and human settlements. The largest population lives in the well-known Chitwan National Park and the adjacent Parsa National Park.

A camera trap survey was conducted in the Terai Arc Landscape over an area of 1,869 mi² covering 14 districts. From the information gathered by camera traps they estimated the number of breeding adult tigers to be 163-235. These comprised 102-152 tigers in the Chitwan-Parsa protected areas. And 48-62 in the Bardia-Banke National Parks. A further 13-21 were recorded in Shuklaphanta National Park. A further survey was conducted between November 2017 and April 2018. This survey resulted in an estimate of 220-274 tigers.

The Internet tells me that as at 2020, they estimate 235 Bengal tigers in the Nepal. The report states that Nepal is on track to become the first of the world’s countries to double its wild tiger population since 2010. The figure stated is nearly twice the number of tigers counted in 2009. This report comes from the World Wildlife Fund.

Nepal is one of 13 countries which enjoys the company of the tiger. They pledged to double the number of tigers in the wild by 2022. This was part of an initiative known as TX2.

The senior vice president of wildlife conservation at World Wildlife Fund, Ginette Hemley, said: “Nepal is a great example for other tiger range countries to step up and commit to the same level of political will and excellence. While this is a huge story for tiger conservation it also highlights the constant need to ensure the protection of key habitats and the value of a landscape approach for this species to recover and thrive.”

PLEASE SCROLL DOWN FOR MORE ARTICLES ON BENGAL TIGER CONSERVATION:

Infographic on why the tiger is endangered

The infographic explains why the tiger is endangered in a succinct way. There are many articles on this website on ...
Read More

This is a screenshot from a video, provided by Parveen Kaswan, of a Bengal tiger being released from a boat ...
Read More

In this interview of Carole Baskin by a presenter at WINK news, she speaks eloquently and fluently about her passion, ...
Read More

China is a CITES contracting party but should they be?

Yes, China is a CITES contracting party. But is China playing the game with a straight bat? Is China doing ...
Read More

How many tigers live in the Sundarbans 2021?

It is claimed that there are 210 tigers in the Sundarbans (the combined Indian and Bangladesh portions) as at 2021 ...
Read More

Dudhwa Tiger Reserve is on the border with Nepal. A tigress named Beldanda living in the reserve had lost her ...
Read More