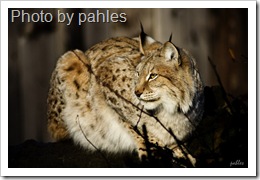 Eurasian lynx – these are thumbnails.
See base of post for license. 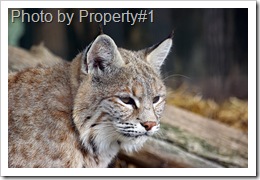 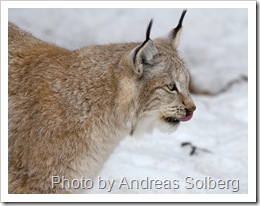 The Eurasian lynx is the largest of the European wildcats. It is also the largest of the subspecies of lynx of which the American bobcat is part. The other is the Canada lynx. The habitat is typically forest and includes the rocky hillsides of northern Europe, Russia and central Asia. The coat is typically tawny colored with black spots. The ears have classic black ear tufts. Prey is commonly quite large – deer but includes hares and chamois. Home ranges can be very large at almost 300 square kilometers. Territory is marked in the usual way with urine spraying, deposits of feces and scratching and claw-raking. Scent is also deposited by rubbing. The range is enormous and the population, despite being extensively hunted, is said to be stable hence classified as Least Concern by the Red List.

The last picture shows a cat with plain or plainer fur. The fur is variable from red/brown with spots to a plainer coat. There is always a general coloration and spotting, or “striped” and “unspeckled”. Because of the wide range (see below) there is considerable regional variation in phenotype (the appearance through the genetic makeup) (src: Bern Convention Action Plan – BAP – dated 2000). The coat is greyish and tinted with a rusty reddish color along the back of the cat and sides, while the underside is creamy white. The coat is ticked and is a tabby cat coat (new window). The body is quite short. The feet are large and the legs long. The head is round. The facial part of the skull is short, which allows for high biting forces. The ruff is distinct. The claws are sharp, ideal for catching prey and holding it and they can retract. Cats walk on their fingers (5 at the front and 4 on the hind legs).

See a page dedicated to a Description of the Eurasian lynx. The page goes into more detail with some fine Flickr photographs published under creative commons – enjoy

This wildcat is the third largest predator in Europe after the wolf and brown bear. The coat is the classic wildcat coat designed for camouflage and survival, which it is good at. Frankly it needs to be as people find its fur desirable. This is a secretive animal, quiet, stealthy, nocturnal and solitary. There are a number of subspecies of lynx (due to the vast geographical distribution – see below); the Eurasian lynx is the largest of the lynx cats, weighing from 40 lbs (18 kg – females) to about 66 lbs (30 kg – males). The BAP says that it is unlikely that cats weigh over 40 kg as is sometimes alleged

The scientific name is Lynx lynx. It is argued that lynx populations in Eastern Europe are overestimated risking over harvesting through hunting (see below please).

The Eurasian lynx is classified as Least Concern (LC).

“Least Concern (LC) is an IUCN category assigned to extant species or lower taxa which have been evaluated but do not qualify for any other category..” (src: Wikipedia, verbatim).

This classification is made despite the fact that this wild cat is considered Critically Endangered in respect of some European sub-populations. Also in Europe this cat has been extirpated (destroyed completely) in most of Western Europe and survives in certain areas where it is hunted. The species is being reintroduced into Western Europe.

It would seem that the rather generous assessment (for me) is largely based on the fact that 90% of the Eurasian lynx occupy the Siberian forests of Russia. And the fact that hunting for pelts (skin and fur) has reduced in Russia and China. At its height the trade in Lynx pelts numbered about 6,000 per year but is currently less than 1,000 per year from each of Russia and China (src: Big Cat Rescue). I don’t know how accurate these figures are. The Red List does not mention figures and they are the main source for this kind of information or should be. However, the Red List does say that despite being listed in CITES Appendix II and protected under the Bern Convention (Appendix III) both sport and commercial hunting is allowed in Russia.

The substantial book, The Physical Geography of Northern Eurasia, Edited by Maria Shahgedanova (latest edition 2003 and priced at $203) – provides some further insights into Eurasian lynx populations and hunting of this wild cat in Russia.

Although the book is published in 2003 it seems that the data relates to perhaps 5 or more years earlier, which should be taken into account. The authors state that there are about 30,000 Eurasian lynx in Russia. Two thousand are legally shot each year. While in European Russia the greatest population density is in the Vologda region (10-15 per 1000 Km²). In central European Russia the density is lower at 4-5 per 1000 Km². The authors say the populations are declining particularly in western regions. European Russia is west of the Ural Mountains. 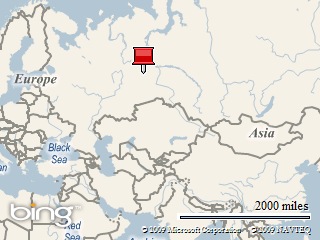 The part of Russia left of the red pin (the line of the Ural Mountains) is European Russia.

In Turkey the Eurasian lynx have been nearly extirpated or are rare across the region.

Interesting research (dated 2002) was carried out in respect of hunting legislation in the Carpathian Mountains in Central Europe. The research relates to three carnivores; the brown bear Ursus arctos, the Eurasian lynx Lynx lynx and the wolf Canis lupus. Of course, I focus on the Eurasian Lynx. The Carpathian Mountains in Central Europe are shown on this map modified from a Nasa image (wikipedia commons Jeff Schmaltz, MODIS Rapid Response Team, NASA/GSFC): 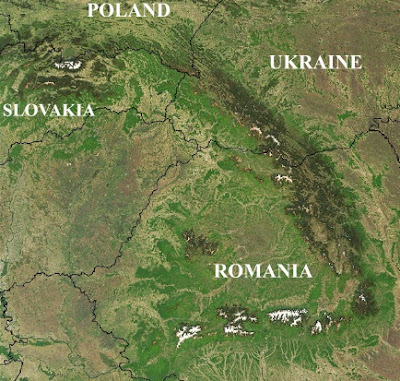 This is the research paper in PDF format: – link broken May 2013. Please read on as this summaries the document (at considerable effort!). I have reduced it to bullet points:

This table compares official to local researcher figures in relation to the Eurasian Lynx over the four countries assessed:

The authors of this research paper relied on local researchers to compile the following table on population density of the Lynx in the countries specified:

This is a thumbnail. Published under Wikimedia® creative commons license = Attribution-ShareAlike License 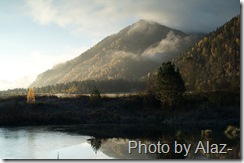 Altay, Russia – forests in the range of the Eurasian lynx (thumbnail). This is the kind of habitat where this wildcat could be found. Home range (“The area an animal uses in the course of its daily activities…” src: About.com) averages averaged 248 km² (males) & 133 km² (females).

As to prey the Eurasian Lynx being the largest of the Lynx group is able to take:

Populations/information by Country (as at 2009)

Extirpated 1900 – reintroduced. BAP says that it is uncertain if the lynx exists here. If it does it is “virtually extinct”Germany

Extirpated 1850 and reintroduced the Bavarian Forest and the Harz  – 1990Latvia

700 (2005). Population estimates are difficult to make accurate as distribution is scattered. Claimed stable. Hunted in Latvia.Baltic

All are due to human activity.

This is an interesting video of a rescued Eurasian lynx in Finland. The cat was released soon after this video was made. It is illegal to keep wild animals in captivity as pets in Finland.

Have Information to Add or Feedback to Make?

If you add to the our knowledge of this wildcat please – Share it!***Please scroll down to see submissions***

Introduction This is an article about the interaction between the lynx and humans at a conflict level. We know that every aspect of the lynx’s decline …

Lynx Was Used For Hunting  Not rated yet
In times gone by the lynx was used for hunting as was the cheetah. In India at the time of the Maharajas both these beautiful wildcats were tamed and …