The magnificent F1 Savannah cats, the most glamorous domestic cats of all. These two are young of course and bred by Martin and Kathrin Stucki at their cattery A1 Savannahs, in Ponca City, Oklahoma. This is the founding breeding cattery for this breed in the world. The breed itself was founded by Ms. Joyce Souffle and Patrick Kelly. A1 Savannahs are the first cattery to breed to the F5 generation (F5 males are fertile). Male F1s are sterile. In fact male F1-F3 and sometimes F4 are sterile too.

There is really no domestic cat with more presence that this breed. Is this a domestic cat? The F1, of course, is the first generation (the first offspring) from the mating of an African Serval and a domestic cat. This then is a wild cat domestic cat hybrid. The F1 Savannah is a foundation cat and perhaps it might be incorrect to call this cat (at first generation level) a Savannah. Perhaps a better name would be a Serval/domestic cat hybrid. This might be better as it would distinguish between F5 Savannahs that are lets say true domestic cats (SBT – Stud Book Tradition cats) and the F1 which could be perceived by some authorities as not a truly domestic cat. Although the point is a fine one. There is concern amongst some government departments about the safety of owning a first generation wildcat hybrid and this would apply to the other hybrids such as the Chausie and Safari for example. It could be argued that for the better acceptance of the Savannah breed the F1 Savannah cats be called something else.

As a layperson what strikes me is the large ears, intense gaze and the markings on the back of the ear flaps, all of which are directly descended from the Serval. The Serval is quite a small wild cat by big African cat standards but the Serval is a very able and athletic wild cat that has acute hearing hence the large ears. The Serval kills small prey by listening and jumping high in the air and thumping on top of the prey to stun and kill it. See the video for the Serval leap.

F1 Savannah cats are descended from the Serval – The video shows the amazingly athletic jump of a tamed wild Serval. Tamed wild Servals are the biggest domestic cats (are they domestic cats? – debatable). The biggest true domestic cat is possibly the F2 Savannah. (Note: I personally disagree with a Serval being in someones bedroom. Maybe this cat is kept in permanently?)

Servals are very rangy and sit high in the tall grass of the open plains on parks like the Serengeti listening. They have a high success rate of kills (50%).

The ear markings on the ear flaps are warning signs to others to keep clear. When in a defensive mode and under threat the ear Pinnae (flaps) go down and point slightly forward showing the other animal the spots. These helps to frighten the attacking animal.

I’ve got to talk about the Serval because there is a of a lot of the Serval in F1 savannah cats, which are about 53% Serval cat. F2s are about 29% Serval and the F3s about 16% Serval cat. So, what you get with the Serval in terms of character you’ll get to quite a significant extent with the F1 Savannah cat (liking water etc.). There is some similarity with Bengal cat behavior.

It is very difficult to mate a wild Serval with a domestic cat hence the high price of an F1 Savannah cat; males sell for $7,500-$22,000 and females $6000-$22,000 (A1 Savannah prices at the date of this post). Also Servals demand special caring requirements with increased cost. I discuss the Savannah cat in much more detail on the Savannah cat page.

Update 7th June 2010: Here is a picture of FOCUS a beautiful F1 Savannah kitten who is a real character and who will certainly turn out to be a magnificent Savannah cat. He has real presence as a kitten so when he grows up the sky is the limit: 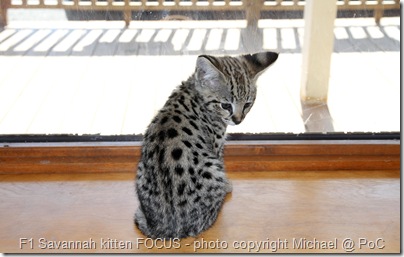 Photo by Michael of Pictures of Cats org.