We are getting mixed up between community cats, stray cats, time share cats and feral cats. The people who compile the statistics are bundling together community cats and feral cats. The two are very different but it is probably impossible to separate them because there is a transition from one to the other. Are you sure you saw a genuine feral cat and not a community cat? If I am correct the picture that we have of cat ownership has to be adjusted. What may be happening in many places, particularly the United States is that there are far more true community cats sharing households in an informal way and far less true feral cats. In other words the relationship between human and cat is looser than we think. 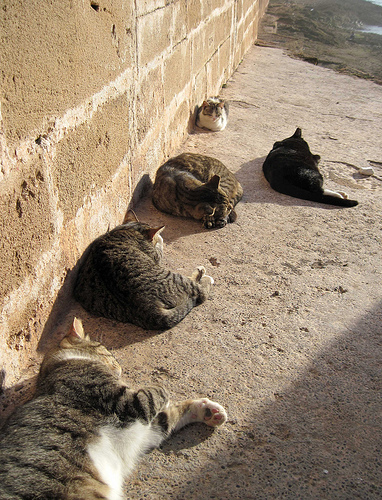 Feral cat: genuinely returned to the wild. Unsocialised and keeps clear of people. Will take time to socialise.

Community cat: a wandering cat who shares households by being fed by different people and who spends lots of time outside but may stay in various homes and places near homes. Is defensive but can be friendly with people. These cats sometimes adopt a home and become “domestic cats”.

There is a lot of cat talk about the large numbers of feral cats. I’ll call these cats “feral cats” in this post rather than “community cats” because I want to make a sharp distinction. I live in London, UK. Marc lives in Switzerland. We don’t see feral cats. I have never seen a feral cat in London meaning a cat that has genuinely turned to the wild. I have seen the odd stray cat but they are generally in pretty good shape. They are not “feral” cats though in the true meaning of the word. Despite this I am told there are 500,000 feral cats in London. I really don’t believe this. There are quite a lot of wandering time share cats but these are domestic and not feral. The person who wrote there were half a million feral cats in London is plain wrong. These sorts of statements can stick around and become fact to the detriment of the cat.

I know in the USA people see true feral cats. There are meant to be about 80 million of them. In southern European countries so called feral cats are very visible. I have been to these countries and seen cats in the streets. Rome, Italy is a case in point. But are these really feral cats? I don’t think they are.

They are better described as domesticated cats that live outside sharing food from a variety of sources. They are community cats.

In places such as Morocco there are lots of cats that some people would describe as “feral cats”. However, they most definitely are not feral cats. They live in the old-style way. That is not belonging to a single household or person but nomadically sharing their companionship between a number of homes and people. They are domesticated and socialized and true community cats. This is probably the way the domestic cat behaved thousands of years ago.

My gut feeling is that the perceptions of Americans towards the feral cat should be adjusted. The number of true feral cats is probably much lower than the figure that is routinely stated. I would suggest that the bulk of cats that are seen in the urban environment and areas adjacent to the urban environment are community cats. Some of these cats might be recently abandoned or have recently become stray cats and are learning the ropes of being a community cat.

As I said the great difficulty in writing about feral cats is that it is almost impossible to point to a cat and say he is feral. Even if you approach a cat and try and be friendly with him it won’t help much in your assessment because initially the cat will be defensive and give the false impression of not being socialized and feral. I am sure a lot of incorrect assessments have been made that way. If you go into someone’s home and meet the owner’s cat he may run away from you as an initial reaction. The cat is known to be domestic. If you approach a cat outside and he runs away you might make the assessment he is feral. That would be incorrect.

I would like to see an investigation into the true number of feral cats. I believe that it would change attitudes and force a reassessment of the relationship between cats and people, and a reassessment of the meaning of the phrase “domestic cat”. If I am correct it means that a lot of the cats euthanised at shelters are community cats. I have a feeling that most of them are.