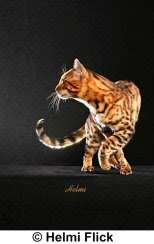 How to Sue on a Cat Contract is about some basic thoughts on the unhappy process of seeking compensation in the civil courts if as a buyer or seller there has been a breach of contract on the sale of a cat, usually a purebred, pedigree cat. In fact, the most important aspect of this exercise is the very beginning and not the actual process.

This is because the process is easy. Nearly all claims for compensation for breach of contract on the sale of a domestic purebred cat will be conducted in the small claims court. And the small claims court is designed to be used by people who have little idea of the process. The reason why a small claims court exists is because for small monetary claims it is impractical to hire a lawyer. This is because when one litigates the issue of legal costs governs a lot of what we do. So, if we sued for $500 and our legal costs are $1000 and we win but the judge does not order that your costs are paid by the loser (or not all of the costs), the whole process has been a waste of time.

And in the small claims court costs cannot be asked for. The whole process is informal and mistakes as to process can be made without penalty, usually, or at least there is considerable latitude. The court and judge will hold your hand (not literally!). Small claims courts are available in the USA and UK and probably in the rest of Europe too. There will be a financial ceiling under which the claim must be made. At one time in the UK it was £5,000 but it varies and rises with inflation. So once you have decided to sue you can go online to get the form or go to the court if you want to have a chat about the correct form. The forms are easy to fill in and there is no need to be worried about errors spoiling things but an attempt at excellent accuracy should be made, nonetheless.

So, that brings us back to the beginning. What kind of thing can we claim compensation for? Basically, three types of things:

1. Major Breach – This is called a breach of condition of the contract. A condition is a major term. This occurs when either party (the breeder or purchaser) behaves in a way in relation to the contract that indicates that they are not bound by its terms and have in effect torn up the contract (i.e. repudiated the contract). This allows the other party to elect that the contract is over and seek damages or proceed with the contract and seek damages as well. A total failure of consideration is when as a buyer you have, in effect, nothing to show for monies paid and a seller no money for goods delivered. This is clearly a major breach, as well. An example of the former might be:

2. Minor Breach -This is called a breach of warranty. For example, if the seller had failed to carry out one of the first two vaccinations prior to sale and the kitten became ill for a while as a consequence this would probably be a minor breach. The judge will decide but it is probably not viable to sue for a minor breach if the sums of money involved are low (even for a major breach) as the trauma and trouble of suing is worth more in monetary value that the amount claimed.

3. Misrepresentation – This is something said by either party that induces the other party to enter into the contract and upon which, the party relied. Here is an example:

Lastly, where there are express written terms they will supersede terms implied by statute. In Britain this would be terms implied by the Sale of Goods Act or an act that replaced it. There will be similar terms that can be implied in the USA, I am sure. These extra terms can be useful if the contract provided by the breeder is deficient and this is not spotted by the buyer. In other words there may be a breach of implied terms and not written terms. A seller may mention in the contract that the implied terms are not excluded. This post is not meant to be comprehensive but a taste of How to Sue on a Cat Contract.

Photo of Bengal cat has no connection with this article on How to Sue on a Cat Contract — photo copyright Helmi Flick – please respect copyright.

How to Sue on a Cat Contract to Home Page

How to Sue on a Cat Contract