In the unlikely event that your black cat has turned a rusty red in normal lighting conditions, there is a possible cure: change his food. Food can alter the appearance of a cat, specifically the colour of his coat. You may have heard of this. It is an interesting topic but, if I am being honest, not of great value to cat caregivers because I believe that a rusty coloured black cat because of a lack of tyrosine is probably rare. I don’t believe that 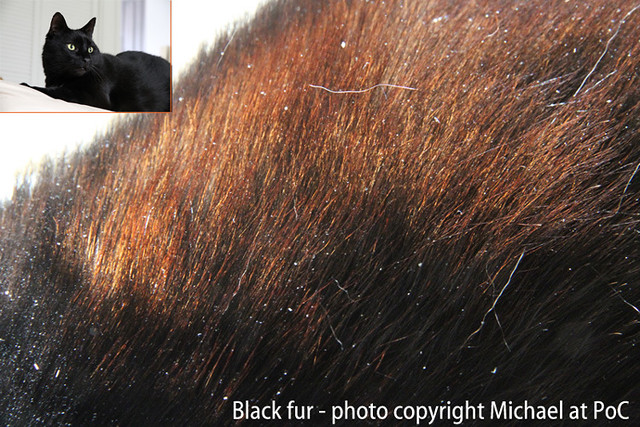 Many foods such as fish contain a ingredient called tyrosine. It is an “amino acid” but I won’t dwell on the technical stuff. I am sure it is added to commercially prepared cat food.

Tyrosine (more accurately called “l-tyrosine”) is needed for the creation of the colour in a cat’s fur. The blobs of colour – pigment – in the hair strands are made (“synthethised”) from tyrosine. There are two types of pigment in the hair strands of a cat: eumelanin and pheomelanin. Eumelanin is brown/black and pheomelanin is yellow/reddish brown. They are collectively referred to as “melanin”. The amount of melanin in the fur determines coat color.

An inadequate amount of tyrosine in the cat’s diet results in an incomplete amount of melanin deposited inside the hair fibres. It appears that this relates to the eumelanin component leaving the pheomelanin to show its color of reddish brown. Or perhaps the pigment is thinly spread through the hair turning brown/black to yellow/reddish brown.

It is interesting to note that the amount of tyrosine required to ensure a full amount of melanin in the fur is greater than the amount needed for a kitten to grow normally (as I understand this tricky subject). That would imply that black hair might normally be rusty coloured. In fact, this seems to be true because black cats look rusty red when backlit – the light shines through the hair strands (see picture).

So, in conclusion, if your black cat has turned rusty coloured just make sure he has a supplement of tyrosine. That is a simplified conclusion and don’t do anything without talking to your vet first, please. There are other potential causes of colour change.

Incidentally, tyrosine supplements for people can be bought over the counter. It is used to treat mental health conditions such as chronic fatigue syndrome and attention deficit disorders.

Interesting fact: the pattern in a cat’s coat is mirrored in the skin but I believe that this is at least partly because of the fine down hairs which are barely visible. However, polar bears have pigment-free hairs but black skin. Melanism is the effect of a patterned cat (usually brown tabby) turning black with a ghost pattern due to a genetic mutation.

Note: the information for the article comes from the Journal of Nutrition.

There are several studies on the internet on this topic one of which is headed: amino acid tyrosine. They conclude: “Reddish hair coat was induced in black kittens born to queens given a tyrosine-deficient diet during pregnancy. Black hair colour was maintained or restored by diets containing a high concentration of tyrosine or phenylalanine.” Tyrosine is one of the 20 standard amino acids that are used by cells to synthesize proteins.

Another study on tyrosine concerns humans. It’s role in the creation of melanin is the same in humans. The scientists concluded that: “Results from studies with human melanocyte cultures derived from different racial skin types reveal an excellent correlation between the melanin content of melanocyte cultures and the in-situ activity of tyrosinase.” The study is titled: Role of tyrosinase as the determinant of pigmentation in cultured human melanocytes.

Are the any other health issues due tyrosine deficiency? Apparently it might cause hyperthyroidism which is caused by low thyroid home.

The cure is to provide a high-quality balanced diet. Treats high in tyrosine are lean pork chops, chicken breast and salmon. Pumpkin seeds are rich in tyrosine containing 1079 milligrams of amino acid per 100 grams of pumpkin seeds according to my research.

What is eumelanin in cats?