The Jaguarundi range is marked in purple on the map below. It is accurately based on the IUCN Red List of Threatened Species™ map which is probably the most up to date map. But all maps of wild cat ranges need constant improvement and updating as the initial information is sometimes less than perfect and things are changing all the time, anyway. Feel free, therefore, to upgrade the map if you have the knowledge and are willing! Although it was created by me this map is meant to be an open collaboration project.  OK, you can go here: Jaguarundi Range (opens in a new window) to amend the map. Some tips on amending the map: 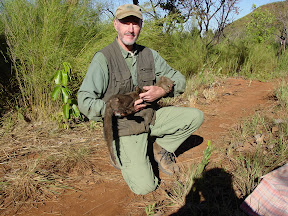 At 2002, the Jaguarundi range (distribution) extended from Southern Texas (no longer it seems as the last one was killed by road traffic in 1986 apparently) through to southern Mexico, central America and into South America where it occupies a vast and significant percentage of this continent. They prefer lowlands up to about 2000 metres above sea level, but have been seen at about 3,200 metres above sea level (Columbia). They occupy a wide variety of habitats.

The Jaguarundi’s range overlaps with (is “sympatric”) the ocelot, margay and oncilla but they prefer more open areas than these other small wild cats. Radio tagged cats in Belize were found to prefer areas near streams. The video embedded in the map above of a Jaguarundi swimming across a stream in Suriname indicates their ease in dealing with water and that they hunt in and around water. There is a report of a Jaguarundi catching fish in a pond. They are opportunistic hunters taking what they can.

In Belize and Mexico studies showed that the Jaguarundi hunts in the daytime, with the peak time
for hunting being late morning. In Venezuela a study found that mammals make up the biggest part of this cat’s diet but that birds and reptiles also formed a large part of the diet.

As is the case with other wild cats and domestic cats the Jaguarundi eats grass. This is thought to be a dietary supplement for cats that aids the production of hemoglobin through folic acid in the grass (Cat Eating Grass – opens a new window).

From Jaguarundi Cat to Wild Cat Species. See some pictures of the Jaguarundi.