The Javan tiger is extinct (although some think it just might not be) but its close neighbour the Sumatran tiger is not. The islands are separated by 15 miles of water. The Sumatran tiger, though, is heading towards extinction if things continue as they are with habitat loss through deforestation. The Javan is the latest tiger to become extinct. It disappeared in the 1980s (Sunquists) and was declared extinct in 1994 (savethetigerfund.org).

The latest supposed sighting was from the Magetan Regency, East Java, in January 2009. – the following is a Google translation from a small part of the story on the Indonesian website: jawapos.co.id:

Three suspected tiger loose in the village of Great Ringin, District Magetan city. Based on the narrative citizens…..(especially those living in RW 3, Red), the allegations were made restlessness and anxiety because the daily activities related to citizen deeply disturbed that the existence of wild animals……”It was the story he saw three tigers while searching the grass in the cemetery area. To prove my truth directly ask for clarification to the fact that two people,” 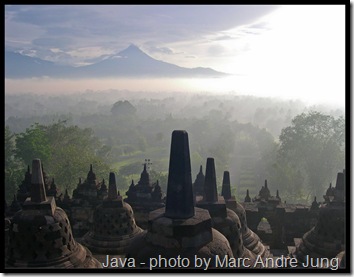 The map shows the island of JAVA circled in RED and SUMATRA in PURPLE. I have marked the island of Sumatra as it is the home of the extant Sumatran tiger. The island to the right ringed in ORANGE is Bali. If you hover over the blue markers it confirms this. The big island to the right is Borneo another island that is being heavily deforested and the home of the Borneo Bay Cat.

As was the case for all the other tigers, at one time this subspecies was considered a nuisance or pest or something to hunt. Java is a highly populated island (
for humans!) that is not that large. There is not an abundance of space. The tiger was considered dangerous and simply eradicated judging by the accounts. They were killed by royalty and big game hunters and poisoned and trapped by the local people. Anything it seem to get rid of them. Eventually they were confined to an area in the southeast called the Meru Betiri. Their prey there, the sambar deer (a small deer) was killed by disease leaving no prey for the tiger. The size of the prey informs us as to why the Javan tiger was relatively small.

An attempt was made to save the last remaining tigers on the island of Java in the 1970s but this failed because plantation owners still shot at them and policing the reserve was unsuccessful. 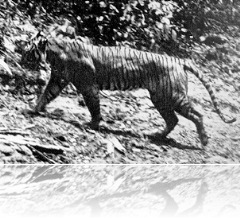 The Save the Tiger Fund site says that the loss of the Javan tiger was a call to action. I think it should have been and if it was the action has regrettably not been that successful as tiger populations are becoming more precarious (e.g. the Bengal tiger’s gradual decline).

I don’t think that we have a handle on the problem. It is almost as if we cannot now succeed because what is left is too little and it is too late.

It is interesting to look back. It is all we can do. The following is an extract from The Edinburgh gazetteer, or geographical dictionary …: Accompanied by an atlas‎ – Page 488 1822:

It tells us that the Javan tiger is smaller than those found further north and was of a similar size to the leopard. This probably accounts for mistaken sightings of the Javan tiger after it became extinct. A black tiger would be a melanistic tiger. There have been accounts of black tigers albeit very rarely. There is no physical evidence in existence that I know of. Javan tigers were small compared to the other tiger subspecies. This is a comparison table:

Here is another account of this tiger subspecies from History of the Indian Archipelago: Containing an account of the …, Volume 1 By John Crawfurd – 1820

These extracts from old travel books or encyclopaedias show how our attitude towards the tiger has changed now that it is endangered in the wild or becoming extinct. But what would our attitude be if the tiger was as numerous as in the 1820s?

Some source material from this book: Tiger bone & rhino horn: the destruction of wildlife for traditional Chinese …By Richard Ellis