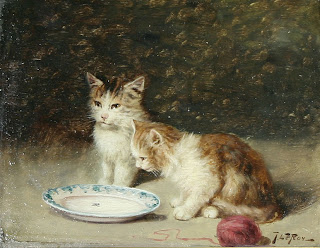 Jules Le Roy was a French artist, a painter. He was born in 1856 and died aged 66 in 1922. He painted in oils and watercolors and specialized in figures of animals preferring cats and kittens. He must have been an ailuophile (a cat lover) and probably lived with cat companions. Many artists like cats it seems. Perhaps it is because people who like cats tend to be more independently minded. Apparently, (and this might need correction) it has been reported that he lived between 1833 and 1865 but this cannot be correct as he fathered a daughter born 1887.

His paintings are “scattered in different countries” (src: French Wikipedia). Examples of his cat paintings other than the one above are: 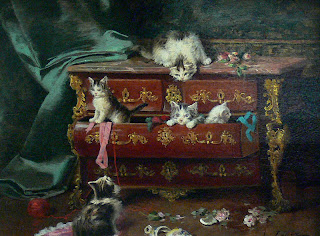 Lets have a look at the cats in and around the dresser. They would all seem to be tabby and white semi-long haired cats of mixed breed. Perhaps that was the kind of cat that was most typically found in France at that time. This was before the cat fancy started or later in Jules Leroy’s life, the early times of the cat fancy that would not have had an impact (or much of an impact) in France in my opinion during his lifetime.

From Jules Leroy Playful Kittens to Cats in Paintings

Cat Shaking Back Legs When Walking

A decent number of people are asking why their cat is shaking his/her back legs when walking. I'd like to ...
Read More

You will see a ginger tabby-and-white cat looking at a video of the cat's former owner who has died. The ...
Read More

Cat jumps over invisible hurdle which is in her head

This sweet cat who looks like an old-style flame point Siamese is nervous of going through the door to the ...
Read More

Resident church cat’s death resulted in a plague of pigeons

There was a time, when Tom, the church cat at St Mary Redcliffe, Bristol, UK, kept away pesty pigeons. Tom ...
Read More

You may remember Oscar. He is quite famous (actually very famous). He's a fluffy, grey-and-white brindled cat who was adopted ...
Read More

Should California learn the lesson of the London plague of 1665?

Dr Christina Lin, writes of a massive homeless crisis and infectious disease threat in California in The Times of Israel ...
Read More

Harking back to the very beginnings of the domestic cat around 9,500 years ago when wild cats were domesticated because ...
Read More

Honestly, it was not an easy decision to make to consider re-homing Porter, but he has been of great service ...
Read More

Today we are visiting the Netherlands and I am pleased to do so as it is rare that I write ...
Read More

On the first day of their lives, Joe Exotic took cubs from their mothers that he had deliberately bred to ...
Read More

Zoos should become extinct because they fail to educate and preserve

I am very happy that a millionaire conservationist who inherited a zoo from his parents has said that small zoos ...
Read More

Oleg Zubkov is the owner of a safari park and zoo in CrimeaA. It appears to be a private zoo ...
Read More

Javon Stacks likes to think of himself as an entrepreneur, exotic zoo owner, primatologist and wildlife educator but the authorities ...
Read More

In the picture you see some of the 48 animals including tigers and lions shot dead by police after they ...
Read More

The rich of Pakistan, apparently, like to possess exotic creatures such as white lions. The laws of Pakistan allows them ...
Read More

They all died because he wanted to have pet lions

This guy, living in Czechoslovakia, wanted to have pet lions. He acquired two. The police were called to his home ...
Read More

PETA - People for the Ethical Treatment of Animals has won a court battle in obtaining a court order against ...
Read More