Keeping wild cats is both potentially pleasurable and fraught with difficulties that can affect both the person and the cat….

…….This seems to be recognised in new Oregon law (taking effect Jan 1 2010) that clamps down on exotic pet ownership. Of course the law affects all exotic non native animals as defined by the legislation. As I understand it, it includes non-indigenous felines, except domestic cats. The native wildcats such as cougar, lynx and bobcat are not included in this law but are covered by Oregon Department of Fish & Wildlife [ODFW] regulations. 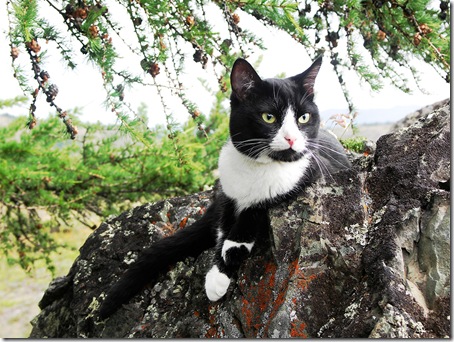 Keeping wild cats – Why keep them when you can keep and enjoy the wild in a domesticated cat? Photo above by rain.zuko – handsome cat and photograph.

Under the new Oregon law permits required to keep non-native, non-domestic cats will not be granted except under conditions and this takes effect 90 days (a period of adjustment) after January 1st 2010.

The new law affects people who keep serval cats. And servals are pretty popular because they are not that big and can make great tame domestic “type” cats. But they are not the same as domestic cats and never will be. Cat breeders who specifically breed Savannah cats of the first generation (the initial wildcat/domestic cat hybrid mating) will clearly be affected by these restrictions.

It could be argued that some people get a little carried away with the idea of owning and living with a serval. I have handled a tame serval and, yes, they aren’t that big, they are very interesting to be with and they are fascinating, but I would never keep one as a pet. The responsibility is enormous. There are very few people with the ability and commitment to meet the levels of responsibility demanded. I am not saying that they are massively demanding just that the levels are considerably higher than for a domestic cat. Domestic cats are very undemanding. Perhaps people want the exotic and rare without paying the price (time and commitment).

This is demonstrated in the words of the person who runs a rescue centre, Cheryl Tuller, co-founder of WildCat Haven. She says that she gets about one call per month on serval cats from owners who are not coping. It is the classic story: cute kitten turns into a relatively good sized wildcat that can tear the place apart and spray urine all over the place. A lot of people declaw them (
for me that just compounds the problem – inadequate care transformed into an assault on the cat – see serval cat escapes).

Cheryl Tuller says that the cats that she takes in sometimes have social, behavioural and dietary problems; all indicating lack of proper care by people keeping wild cats. She says that she has no space left at her sanctuary (at July 2009). She also says the situation is the same at other similar shelters.

What is behind the change in the law of Oregon? I have not seen anything said about it but it must be this:

Does this new legislation indicate a general change in the culture of keeping of wild cats? Laws do change culture. Laws are meant to reflect what people want. And it is a time for reflection on what we are doing. Another area where change is required is declawing cats and the frontiers of change are taking place in West Hollywood, California, where it has been banned. You know, the time of living beyond our means (with the credit crunch) and with scant regard for the long term consequences of our actions (global warming) are or should be over. And it is time to have regard to the long term consequences of dealing with wildcats as pets rather than as wild animals that we allow to live in the wild and with which we live in harmony.