In this article on kitten development, I refer to the development of the domestic cat after birth. About 70% of kittens are born nose and feet first (the so called “diving position”). They are covered in a transparent membrane (foetal membrane). The mother licks this off and eats it. The mother then severs the umbilical cord and clears the mucus from the kitten’s mouth and nose at which point the new born gasps her first breaths, and life on the outside begins.

The early stages are important in developing the offspring/mother bond. It should not be interfered with.

Once all the kittens or some are born the mother encourages the kittens to suckle on her nipples by bringing the kittens close. The kittens suckle and stimulate the production of colostrum, mother’s milk. Colostrum contains the vital antibodies that protect the kitten from infection.

The milk of domestic cats contains eight times the amount of protein in comparison to human milk and three times the levels of fat. Research indicates that mothers lose weight at the rate of 5.7 grams daily when lactating (src: Sunquists).

The mother recognises her kitten by scent and her relationship sustains the kitten for the first weeks of life. Sometimes, due to psychological reasons the mother may neglect, injure or kill and eat her kittens or a kitten. Mothers commonly eat stillborn kittens. Cannibalism occurs not uncommonly, apparently and particularly in catteries (see article below for more).

All being well, the kittens grow rapidly on the rich colostrum. New born kittens eat and sleep and do little else. Nursing can take up to 8 hours of the day. They have a preferred breast to suckle on which is identified by smell. Kittens can be sexed soon after birth.

The mother should normally keep the nest clean and stimulate the elimination reflex of the kitten by licking its bottom and belly.

Kittens in large litters are smaller initially and put on weight more slowly than if they were in small litters. Here are some charts:

Cats develop their hunting skills through a range of experiences not just play. Some kittens would seem to be more talented and therefore better at hunting at an earlier age but those less talented catch up by the time that they reach adulthood. Domestic cat hunting.

Early learning by watching is apparently a good way to pick up skills. And this process is made more effective if the teaching cat is known to the trainee (i.e. mother showing offspring).

Kittens tend to follow mother’s ways. For example, in their choice of prey and food. This is perhaps not unexpected since they have inherited some of her genes and learnt basic skills from her. 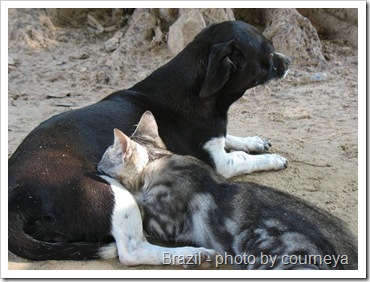 Picture above – dog nursing near adult cat. Taken in Brazil. It is not that unusual to see cross species mothering, it seems to me, in kitten development.

We sometimes forget that kittens are individuals with varying personalities. Some will be more independent or bolder than others, which may translate to being more friendly with other littermates and people with whom they are familiar and who they treat as siblings. In fact this is borne out in research.

Kitten development in respect of what breeders call socialisation (friendliness and an acceptance of people and other animals) depends on the breeder and one classic example is the development of the F1 Savannah cats that were raised by A1 Savannahs. These are first generation wild cat hybrids yet they behave like very well socialised “ordinary” domestic cats. Here is a video of Mar tin Stucki of A1 Savannahs socialising top quality Savannah kittens:

The best kittens that are to serve their lives as domestic cats are those that have been handled gentled and played with during a sensitive period of between 2 – 5 weeks of age and more. A kitten will be entirely weaned at 8-10 weeks of age.