With a title like Leo the Lion we need to start at the bottom, the oldest use of this phrase, the constellation, Leo.

A constellation is an area of the sky for astronomers. For laypeople it is both an area of the sky and a formation of stars that form a vague shape. The various shapes are signs of the zodiac of which there are 12. The zodiac is a celestial mapping system based on coordinates. It was created and developed in the 1st millennium BC by Babylon astronomers. Babylon is in what is now Iraq (50 miles south of Baghdad the capital).

The constellation Leo has a history stretching back thousands of years across many civilisations. It has been worshiped in ancient Egypt, for example. In Egypt, this was because the rise of the major river, the Nile, rose when the sun passed through the constellation.

To the untrained eye it is hard to discern how the shape of the lion is made out by the stars. Apparently, it is fairly easy to see in the spring north sky (face north and look up on a clear night!).

by Dave Pearson – The bright light to the center right is the planet Saturn. The streak is the space station passing over. Leo covers the left half of the image, two thirds of the way up the image. I cannot mark the image as this is not allowed under the license to use it: published under a Attribution-NonCommercial-NoDerivs creative commons License — this site is for charitable purposes in funding cat rescue.

Now for some lighter stuff:

The sun is in the constellation Leo from roughly July 23 to August 23 (western astrology). People born between these dates are, in astrological terms, Leos. People with this astrological zodiac sign are meant to be masculine, positive and extrovert. 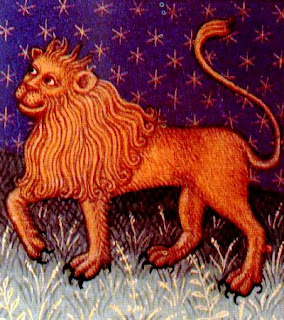 Leo the Lion — the MGM mascot

This is a copyrighted image published here under the rationale as set out by the Wikipedia user: Trogga and which can be see on this page. I adopt this rationale for use of the image here.

The real lions that are part of the MGM logo (Metro-Goldwyn-Mayer, a renown Hollywood film study) are shown at the beginning of an MGM produced film. They are probably the most seen and best known lions of all. What do we know of these famous lions? Yes, there are more than one. Here is the list of Leo the lions:

A 46 minutes (short?) animated film directed by Toshiyuki Hiruma and Takashi Masunaga and written by George Arthur Bloom.
It is the story of a lion king who behaved arrogantly in failing to serve his subjects and who eventually comes around to realising how a king should behave to his credit and benefit. It is modestly popular rated 5.4/10 on the Internet Movie Database. The film is described as a heartwarming musical adventure. A family film.

Japanese cartoons or animated films are called “anime”. The word, “anime” is taken from a part of the Japanese pronunciation of the English word “animation”. This film was a sequel to Kimba the White Lion, which was a Japanese-American co-production. The lion in both films is white. 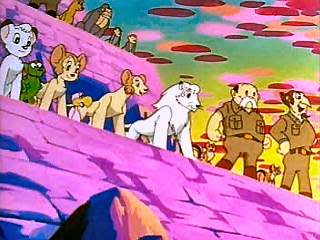 This still from the movie shows the main characters including Leo in the center. This image is published under fair use despite being copyrighted. I adopt the rationale as stated by the Wikipedia user: Kimbawlion on this page of Wikipedia. The film was produced by Dr. Osamu Tezuka.

And lastly a British singer, no less, who I give a passing mention to, as he is not a lion!:

His actual name is Leo Ihenacho. He was born on 28th May 1978. He became known signing for The Streets and has toured the USA and Europe. His nickname was given to him by Mike Skinner, a British rapper from Birmingham, England, born 1978.

From Leo the Lion to Fun and Facts About Cats