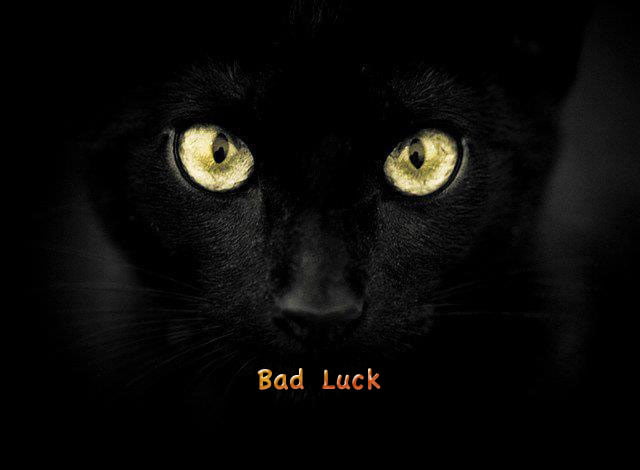 There is no hard evidence to support the stories that a cat’s character can be determined by coat colour. Likewise there is nothing to support the idea that black cats are unlucky or, rarely, lucky. People like to stereotype animals and people of a certain colour. Is the “black cat syndrome” an extension of racism?

Is it good or clever to think that certain types of cat are lucky or unlucky? The answer depends on whether the question relates to the cat or the person. In the RSPCA rehoming center in Shropshire, England, in October 2011, 60% of the entire shelter population waiting for homes were black. I think that sums it up.

Although there are many pages on cat superstitions I haven’t seen anyone discuss the significance of it in relation to the cat except when discussing witchcraft and cat familiars. Obviously a belief in witchcraft was bad for the black cat. People still believe in witchcraft.

I’ll state right away that it is obviously not good for the cat or for that matter, us, to have superstitions about cats of a certain colour. This is because it affects negatively cats that have a coat colour which is considered unlucky and affects positively cats with a coat colour considered lucky (white and in Japan the tricolor – the calico bobtail). The is obviously unfair and plain wrong. It is unhelpful and frankly stupid to make decisions based on superstitions yet millions of people do just that.

I don’t mind so much if the superstitious decision maker is thinking about something other than animals but where animals are concerned decision making should be based on a sound thought process because the decision can affect the life of the animal.

Piles of posts on cat superstitions on PoC – I didn’t realise there were so many! – opens a new tab or window in your browser.

Following on from what Dan told me, here are some more superstitions regarding cats in Russia:

It is by pure chance that a black cat is considered good luck under the culture of a specific region. Here, for example, is a comparison between regions:

As usual it is about education. More educated people are less likely to be superstitious and more likely to understand the relationship between cat coat color and personality.