So, I immediately went to the About Really HUGE Cats/Really CUTE Kittens and Cubs Flickr Group and noticed a recent set of images of a majestic looking Maine Coon living in Germany. You can’t miss this cat. He is a stand out cat.

His name is Oscar Wilde. He is a red tabby with white on his chest and neck up to his nose. I was immediately attracted to Oscar’s size and stature. He really does look like the boss cat. Although he is probably very sweet and docile. 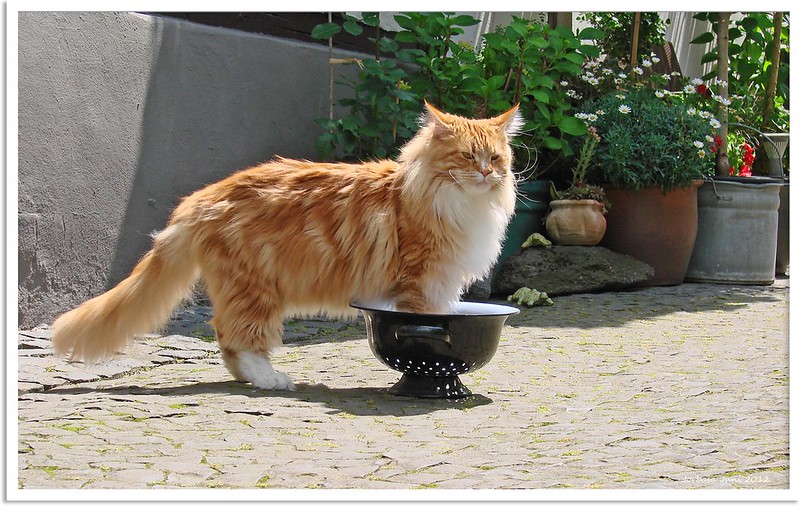 You can see the original on Flickr on this page. The excellent photo is by Barbara whose Flickr name is Jorbasa. Note to Barbara: please leave your photo on Flickr because if you remove it or move it, it will disappear on this page! Thanks.

The picture is also a direct link from and too the Flickr page. I think it looks great in large format. You get a better sense of the stature of the Maine Coon when the image is in large format. That is an important feature of the Maine Coon. They do have this presence that is due to size and appearance. I wonder how many ‘unknown wildcat sightings’ are in fact indoor/outdoor Maine Coons? That said I would never let a Maine Coon wander around outside without supervision.

The ruff and shaggy long fur coupled with a ‘solid’ face gives them that presence. The face is important for me. The Maine Coon face is very particular. It can be distinguished from cats that initially look similar such as the Siberian and Norwegian Forest Cat. The Maine Coon has a squarer muzzle and a less delicate face compared to the NFC. Although that is just me thinking aloud and not by reference to the breed standards. I just get that impression from looking at lots of pictures of cats!

By my estimation the Maine Coon is the world’s largest purely domestic cat. They probably look bigger than they are because of that very noticeable fur. Underneath they can feel quite rangy and thin. They are certainly long. Their length is another notable feature. The world’s longest domestic cat is a Maine Coon. You see that length when they do the meerkat position.