The Mexican bobcat is still considered a subspecies of the bobcat but perhaps a better description is “potential subspecies” because it is by no means certain that it is different or sufficiently different to the bobcat that is found in the United States and Canada. Members of one subspecies should differ morphologically or by different DNA sequences from members of other subspecies of the species. And this is not necessarily the case.

The argument below on this page indicates to me that this cat is probably not a subspecies and on that basis when we talk about the Mexican bobcat we are in fact talking about the bobcat living in Mexico, a more dry and arid landscape but the bobcat is able to adapt to a wide range of habitats. Kevin Hansen in his book, Bobcat, says, Bobcat, Master of Survival. Its adaptability is, no doubt, one factor in its survival. 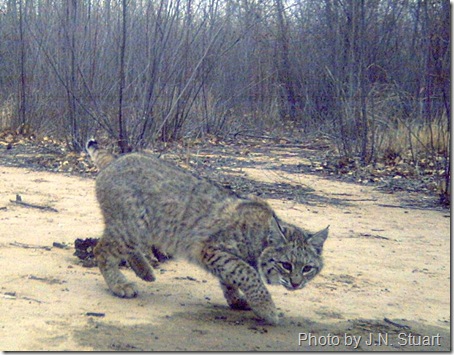 The above is a camera trap photo by J. N. Stuart. The creative commons license to reproduce it does not allow for improvements to it, which I have carried out. Sorry. I hope you accept that this is an improvement and it is a great picture – very real and alive and wild. Secondly, it was taken in New Mexico and not Mexico but as the ranges of the bobcats in Mexico and New Mexico overlap this cat is almost certainly the same as the one found in Mexico. It was taken at the Bosque del Apache National Wildlife Refuge (see location below). This is the original picture: 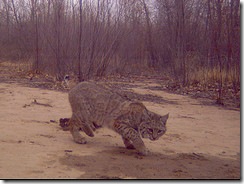 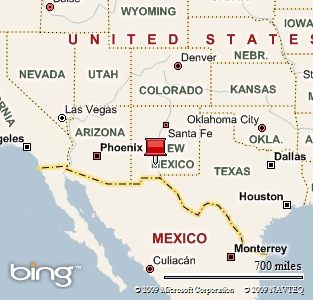 It is listed as a subspecies (one of 12) by Hall 1981 and Anderson 1987 (Bobcat by Kevin Hansen). And, also, by J.A. Allen allowing this cat to be given the scientific name: Lynx rufus escuinipae. Its range is from central Mexico, with a northern extension along the west coast to southern Sonora.

However, Mr Lawrence G. Kline submitted a petition that the Mexican bobcat be delisted from the list of endangered species under the ESA (Endangered Species Act). In support of his petition he said that there was no taxonomic differences between the bobcat populations of the United States and Mexico and that the Mexican bobcat population does not represent a “discrete population separate from the U.S. bobcat population”. He was arguing on behalf of trappers so he would say this as it supported his argument that to kill the bobcat in Mexico was in fact killing the wide ranging bobcat and there was no argument that supported the need to protect the Mexican bobcat as was the case at the time. However it does raise the question as to whether this bobcat is a subspecies.

The IUCN Red List of Threatened Species does not list 12 subspecies of bobcat and it says this in relation to conservation efforts concerning the bobcat:

The Mexican subspecies L. rufus escuinapae was listed on CITES Appendix I until 1992, when it was down listed to Appendix II on the grounds that it is not a valid taxa (Govt of US 2007)

This states in simple language that the Mexican bobcat was considered the same as the bobcat that inhabits the United States. The people who run CITES would seem to agree that this bobcat is not a subspecies as they would not have downgraded it if it was (although no doubt this judgment was coloured by politics – the desire to start killing it again for its skin). This is because in downgrading it they opened the door to trade in pelts, which would seem acceptable to them if and only if it was not a subspecies.

Modern methods used to enable wildcats to be distinguishing into species and subspecies incorporate DNA testing. In the past (and currently) methods included: appearance, behaviour, vocalisations etc. The classification of the Mexican bobcat as a subspecies originates from a time when DNA analysis was not used – in the 1980s and much earlier.

The Wikipedia author lists this bobcat as a subspecies but does say:

The subspecies division has been challenged, given a lack of clear geographic breaks in the Bobcat range and the minor differences between subspecies

The author refers to a CITES re-evaluation of this cat’s status. In that assessment it was stated that:

In other words the basis for the argument that this cat is a subspecies is insubstantial. In addition the geographic range of the Mexican bobcat overlaps with the bobcats in the southern United States and the skulls are similar to those of the Californian and Texan bobcat.

Conclusion: The Mexican bobcat having been classified as a separate subspecies early on (1903) based on rather flimsy information is being reclassified using modern DNA analysis. The position is still unclear but it would seem that its classification as a subspecies is in doubt.

{note: Copyright issues: I have quoted short extracts verbatim on occasions. This is done for reasons of accuracy and fair use is pleaded on the grounds that it is educational and the quotes are about facts and not original works}

On the basis that this cat is not a subspecies the topic to discuss is the Mexican habitat. (see Picture of a Bobcat for a discussion on the appearance of the bobcat).

In Mexico, bobcats inhabit dry scrub, mixed forests of pine and oak, coniferous forests, and tropical deciduous forests. The following picture is of Mexican forest that is just outside the southern most range of the bobcat (as assessed) but gives a nice idea of what bobcat territory in Mexico might look like: 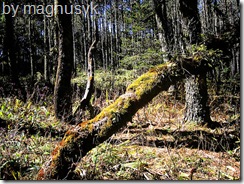 The fine book on wildcats, Wild Cats Of The World (published 2002) says that there is no information on the status of bobcats in Mexico. That begs a ton of questions. Why was the CITES classification downgraded, for one? We cannot make any assessment on conservation without proper information.

Loss of habitat is the usual reason for threats and that is the case for the Mexican bobcat. The population of all bobcats is, however, considered to be stable (IUCN Red List of Threatened Species™).

The Mexican bobcat is treated no differently than the bobcat generally under CITES and is listed under Appendix II. The bobcat is:

Conservation is probably sparse as it is not considered to be threatened.

This is the current ranking of the most popular cat breeds recognised by the Cat Fanciers' Association (CFA) which is ...
Read More
Why are black-and-white cats unpopular?

Black-and-white cats are more popular than black cats and less popular than grey cats. Therefore their popularity is relative and ...
Read More
What is the Maine Coon temperament?

The Maine Coon has a sweet temperament. They are relaxed and easygoing with small voices including the famous trill. They ...
Read More
What are the popular cat breeds?

Although cat association registration numbers don't automatically equate to public popularity, they are an indicator, hence the title, which was ...
Read More
Maine Coon Cats

by Judy Nelson (Margate. FL) Binkyjack The last time I wrote was in Dec 2009. At that time I described ...
Read More
Is my cat a Maine Coon?

by Erin (Oakland, CA) She turned up on my door step about a year ago, and after trying but failing ...
Read More
Communicating With Cats

by Krystl (Summerfield, NC) 5 years ago I was blessed to be chosen by a cat who had escaped her ...
Read More
TUCK – My Maine Coon Cat

I have had our Maine Coon Cat, Tuck, since he was five weeks old. He was born on February 14, ...
Read More

Pictures of Lykoi and Sphynx cats

This is 2-year-old Lobo a Lykoi cat, commonly called the werewolf cat, and his buddy, Dobby, who is a Sphynx ...
Read More

This is a good picture of a Lykoi Cat or Wolf Cat. I improved the image quality a bit. It ...
Read More

Watch out for the Lykoi cat scam on Craigslist

There is an individual living in Stratford, Oklahoma, USA who in my opinion is trying to scam the public (or ...
Read More

This video may interest people who are interested in the cat breeds. The Lykoi seems to be one of the ...
Read More

Finding creative ways to communicate directly with our cats is essential. It is the most important way in which we ...
Read More

Devising Ways To Talk to Your Cat

Tests are being devised which will allow a person to put questions to animals including, of course, companion animals, about ...
Read More

"Cat Talk" or "Cat Speak" is a form of communication arising out of an intimate and close relationship. All of ...
Read More