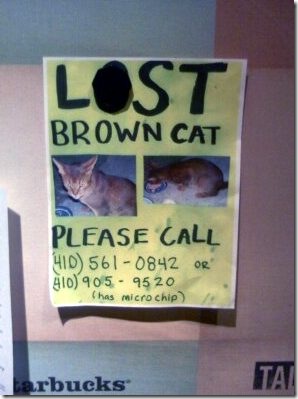 There are it seems two aspects of concern in relation to microchipping pets including cats:

A microchip is a glass encased implanted radio-frequency (RFID) microchip transponder. It sends out a signal which is received outside the body of the cat by a device (a scanner or cat flap) or held by the veterinarian, or other person.

They last for about 25 years. This produces a registration number from which data can be accessed such as owner and address. They are FDA authorized in the USA.

There is no doubt that it is effective, in more ways than one. It is not uncommon to see stories in the press about cats that were lost and then found because of microchipping. A recent story is a good example. It concerns, “Dopey”, a long legged, rather rangy, ginger tabby moggie cat. He went missing in Sacramento, USA, about 6 years ago and thanks to microchipping was found again. In between getting lost (“went missing”) and being returned he passed through the hands of two other human companions. When the second died he was taken to the Yolo County Animal Shelter in Woodland. The staff discovered an American Kennel Club (AKC) Companion Animal Recovery chip under his skin.

The “owner” was very surprised, unsurprisingly! Anyway, a happy ending thanks to the process of microchipping pets including cats. Here is another cat, Ivan, who was lost for several months and found thanks to $40 microchipping:

There were three videos here but all have gone wrong. Two have been removed and the third lost the embedding code so I have removed it.

Another benefit that we might occasionally use is the microchip sensitive cat flap. These are becoming increasingly common it seems. They are designed for the outdoor cat and act as a kind of cat key letting in the cat with the microchip and none other including those part-time cats, stray cats and feral cats.

First microchipping is considered safer than cat collars (new window). Microchipping is safer in terms of the physical danger (possible strangulation) of a cat collar but is it completely safe to implant something like this inside a living creature? Research on mice indicates a 1-10% chance of development of a malignant tumour around the microchip.

There have been reports about tumour induced microchipping of pets (11, it seems, over 1990-2006). The reports were reviewed by Katherine Albrecht in November 2007. The report is called, “Microchip-Induced Tumors in Laboratory Rodents and Dogs: A Review of the Literature 1990–2006“. Tumours developed around or close to the site of the implanted microchip in between 0.8% and 10.2% percent of the tested animals. It is believed that the microchip has a negative impact on the genetic make up of the adjacent cells. The mircochip acts as a genotoxic object (a substance that can cause damage to DNA material). However, it would seem that millions of cats and dogs have been microchipped with no significant reports of cancer indicating that the benefits outweighing risk but please do your own research.

Another problem is that microchips can migrate (move) from the back of the neck where they are implanted to the shoulders and sides. The cost of implantation may include lifelong registration (usually does). Petlog, a branch of the Kennel Club run a registration service in the UK. If you move you’ll need to update the database. This may incur a small charge.

Another development is GPS (global positioning system) microchipping. This sounds spectacularly good as it avoids the fact that someone has to scan the microchip and then locate the owner. Perhaps they have moved and not updated the microchip. With the GPS system the owner can track down his or her pet herself. This seems to come from the big brother concept of microchipping prisoners (people)! I am not sure how far this has developed.

Microchipping Pets including Cats – Conclusions – The indications are that the benefits outweigh the possible health issues. Routine inspections (by touch) around area of the implanted microchip and surrounding areas seems sensible. Perhaps on a visit to the vet it could be scanned to see if has moved etc.