In talking about mountain lion cubs were are talking about beauty, vulnerability, and parenting. I cover these topics but first a picture and a video of a cub and a baby to illustrate the page. In academic terminology this page is about reproduction and development in respect of the puma (another name for the mountain lion). 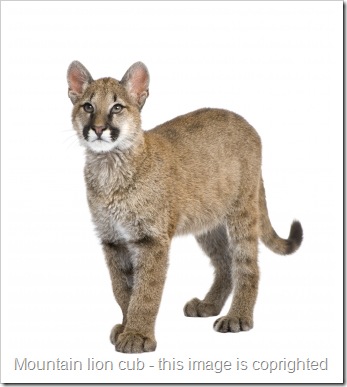 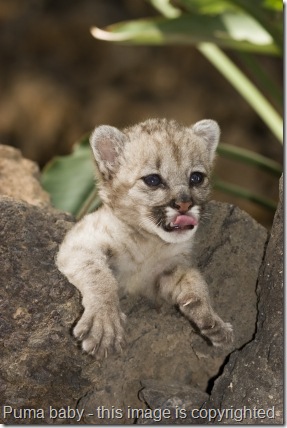 So, what is it like for mountain lion cubs? What are the stages to becoming independent?

A newborn kitten weighs between about 400 and 500 grams (just over a pound). The fur is brownish and densely spotted. Thereafter this is the timetable:

Mortality can be high for newly independent mountain lions who are looking for a range as residents will kill. This is a high risk time for the young puma…..

I have embedded the following video on both the mountain lion attack page and the mountain lion sounds page as it covers both aspects as well as showing a mountain lion cub being “trained” by its mother. When mountain lion cubs learn to hunt they walk slowly and scan either side of the trail. The cubs recognise prey by (a) its movement (b) the scent trails left by prey (c) the sound of the prey (d) and their experience in having eaten a certain kind of prey before provided by the mother. 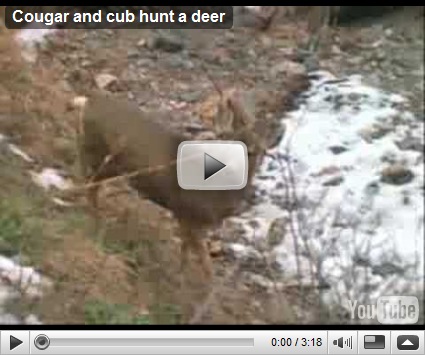 I cannot leave this task without referring to the mother’s role in birthing and rearing her offspring.

The mother is receptive (on heat – estrus, estrous or oestrus) to the attentions of the male puma for a period of 4 to 1 2days (captive puma research). Male and female typically stay together for 1-4 days when breeding. The oestrus cycle is between 23 and 60 days (captive) and 3-4 weeks (form wild cat research). The oestrus cycle is: the periodic changes in the female that take place under the influence of the sex hormones.

The age at which female pumas become sexually active (first reproduction) varies and can be 18 months to 43 months of age. The variation is thought to be dependent on acquiring a home range.

Pumas behave in a similar way to other cats when mating (see cats mating). The female solicits the male by provocative behaviour followed by body rubbing and calling. It is believed that ovulation (the production of the egg – ovum) is induced by the mating (as opposed to happening periodically).

Gestation (the time of the pregnancy) lasts 92 to 93 days. Litters are typically 1-6 kittens. Birth takes place in a den, which is well hidden (e.g. caves or roots of a tree). The availability of food probably dictates when births take place. After all the mother has to find prey more frequently than normal.

As mentioned above when the mountain lion cubs are about 6 months of age they accompany their mother on hunting expeditions. At this stage the mother is under pressure to provide for her young by increasing hunting trips – see below.

It is probably that breeding populations of pumas only exist where there is sufficient prey. I am once again indebted to Mel and Fiona Sunquist the authors of Wild Cats of the World for the main source material together with Stockxpert (pictures) and YouTube.