Here is a pretty full discussion on mountain lion tracks. It is from the standpoint of a person who loves the mountain lion and protecting it. I think people should enjoy the presence of the puma and seeing their tracks. It is nice to live in harmony with this impressive predator. I know that many Americans like to hunt the puma and I have to think of farmers and predation on livestock. But my wish is that humans try and find a way to live in harmony with this cat rather than enjoy killing it. I mention this because I guess tracking pumas by recognising their pawprints is one factor in finding them to kill them. Why not ‘shoot them’ with a good SLR camera and a 500 mm lens rather than a rifle? Far more constructive and pleasant.

Here is a nice video from a person who appears to be respectful of the puma. She’s my kind of person. Respectful but not fearful. Knowledgeable and interested in learning. She enjoys the desert. I would too if I lived there.

Here are some stills from the video.

The paw of the cougar or mountain lion looks like this: 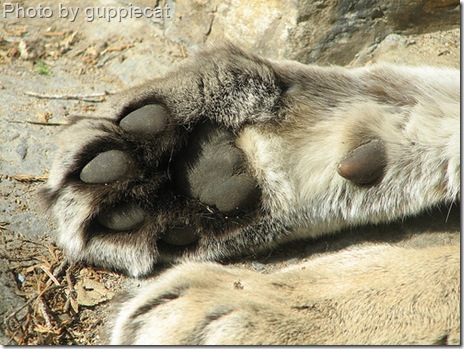 The photo of the cougar’s paw above is by guppiecat (new window). To me it shows why the fourth toe pad (near the ground in the photo) doesn’t show sometimes in tracks or is less pronounced – it sometimes protrudes a little less.

Kim Cabrera says this about the mountain lion paw print:

The above picture is extracted from Texas Parks and Wildlife field guide (I provide a link in thanks and acknowledgment), which says that large hunting dogs can leave tracks bigger than those of the mountain lion but the heel pad of a dog is smaller. Another distinguishing trait is that the Mountain lion’s toes are tear drop shaped as mentioned and spaced widely compared to the dogs more rounded shaped toes and which are less widely spaced. Also, dog tracks normally show nail marks while the mountain lion doesn’t unless running. A cougar’s nail marks are also sharper and narrow than the dog’s.

Mountain lion tracks leave a heel pad track that is 2-3 inches wide (front) and 1.75-2 inches wide for hind legs. A particular characteristic is the three distinct lobes divided by two indentations of the hind (back) edge of the heel pad. Bobcat tracks are considerably smaller. The front being rarely wider than 1.25 inches.

Here are a series of photos of paw prints taken in various places by different people: 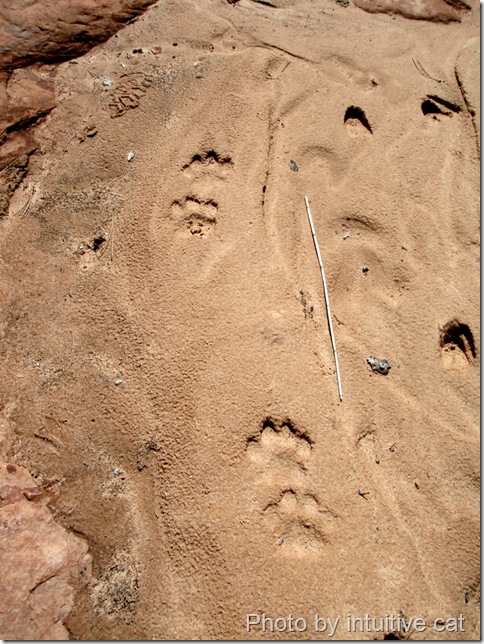 Photo by intuitive cat published under: Attribution-Non-Commercial-Share Alike 2.0 Generic CC license. These tracks seem to be set in rock. The photographer says, “these are about 2.5 to 3 inches across. Mule deer tracks can be seen on the right “. The photograph was taken in Zion National Park (marked by the red push pin on the map below): 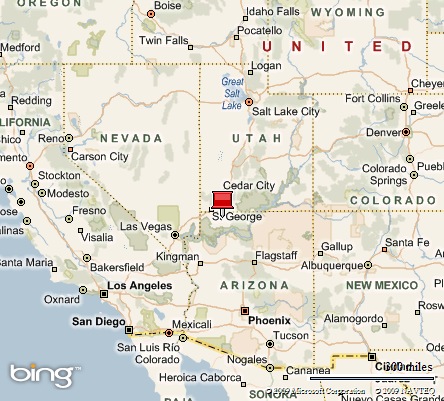 Where are you likely to see mountain lion tracks? Well, this cat’s distribution or range is very wide, the widest of all the cats in the Americas. See map below. The picture is a thumbnail so please click on it. It is published under Wikimedia® creative commons license = Attribution-ShareAlike License. The author of the original uncropped version is: Zoologist (new window). 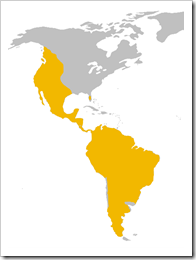 I am indebted to the following in preparing this post on mountain lion tracks:

A word about hunting

What to look for when searching for mountain lion tracks? First please note this. If you are learning about the tracks of this big cat for hunting purposes, I beg you to reconsider. Hunting is prohibited in much of South America and California but population numbers are declining because, in part, hunting is legal in much of western US. They are basically persecuted by people. This cat is often relatively small (in Colorado males weigh about 60 kg = 9.4 stones, the weight of a smallish woman in America) and can be chased away (and if you think that you have to defend yourself from an attack). Plus, they are gentle cats and inclined to run from humans not attack. Better to enjoy its presence in the wild rather than kill it for pleasure. Finally, attacks are extremely rare: 14 in 117 years in California, for example (see Mountain lion attacks in California).

The mountain lion has several names as you might know. It can cause confusion. Other names are:

Mountain Lon Tracks in New York State?  I live in Binghamton NY (New York state) right on the edge of PA (
for Europeans PA stands for Pennsylvania). My husband and I walk my dog in the back of …

Cougars Alive and Well in Louisiana  Around 1998 while bowhunting whitetail deer on a public Wildlife Management Area, namely Red River WMA located in central Louisiana I spotted an approximately …

Black Panther at Dale Hollow, Ky  We lived close to the Ky state park, Dale Hollow. About 30 years (1981) ago my young son and I was driving home when we watched a Black Panther cross the …

Black Cats in Kentucky.  I live in Eastern Kentucky (Lawrence County) and all my life I have heard members of my family talk about sightings of the Black Panther.

Regular cougar sighting in North Carolina  I live in the state of North Carolina approximately 430 meters from the Peedee river. I own 68 acres of land right next to wildlife.

I have been seeing …

Fresh Cougar Tracks  While fly-fishing on the Jemez River in New Mexico, I entered the river’s narrow canyon and headed upstream. In actuality, this canyon is known as a lava …

What is the possibility of being attacked by a mountain lion?  I spend many hours in the hills and woods, especially in the Summer. Several of my neighbors have seen two large black cats, for four or five years, in …

Is this a Cougar track?  Found these tracks on our property. I had some hunters tell me that they saw a cougar while hunting this last fall. (Needless to say, they found somewhere …

Is this a mountain lion track?  Hiking in the morning to the summit of El Cajon mountain in San Diego…took a picture of this track.

Hi Kevin…. sorry it has taken …

I encountered a seven foot long oily black mountain lion  Dec. 2007: Mears, Michigan….Returning from Hart after breakfast at 8:30 am driving west to Silver Lake on B15 ridge road; I encountered an oily black …