Are you as surprised as me at this photo from a 1952 cat show? Is it cat cruelty? It is close to it. The person carrying the cats would probably say that he does it all the time and nothing ever happens. He’d probably say his cats like it. It is still wrong. Is it an example of a cat breeder becoming blasé about the welfare of his cats, through complacency?

Today, this cat fancier might be stopped and questioned about the possibility of being charged with animal cruelty under modern laws. Although it is very unlikely.

I have never seen a person carry around a cat, purebred or not, like this – unless the cat is dead or it’s China – sorry China but I have seen a cat being taken to market to be killed for meat being carried like this.

The picture, from Life Magazine1 is of a Siamese cat breeder (I presume) carrying his Siamese show cats to the show in 1952. It is interesting on two counts. 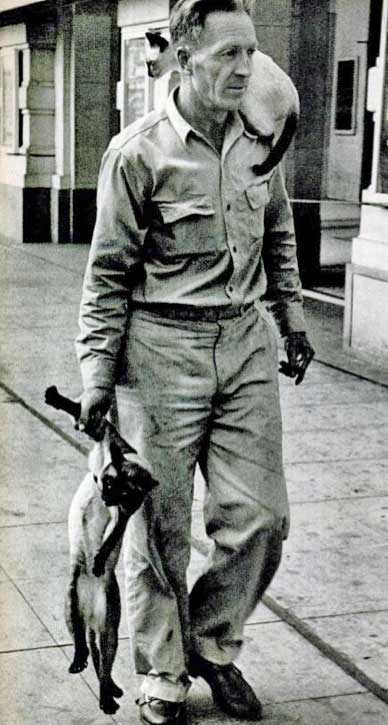 I have to say that I don’t think it is as bad as it looks but it is not good particularly when it is a breeder or at least someone who knows cats and is heavily involved in cats. 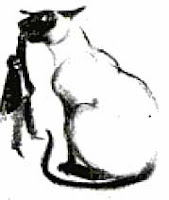 It is not recommended for obvious reasons to carry a cat like this. It could cause injury to the shoulder and leg. These are show cats, purebred, pedigree cats that are at a cat show to win a prize.

The second point of interest is the type of Siamese cat in the picture. They are not what today I call “modern Siamese” meaning highly bred oriental shape (very slender) Siamese. These cats are what breeders would call “old-style Siamese“. This was the only type of Siamese in the USA in 1952. Today there is an extensive range from super slender to more cobby or natural looking traditional Siamese.

Note: (1) about publishing the picture here. The photo is 60 years old. Google allow people to embed the picture in their websites using the iframe tag. On that basis I have to make the presumption that I am licensed to publish it here in the conventional way using the img src tag. If someone thinks differently please contact me. The picture of the drawing is published under the same rationale.