This page on the social organisation of the snow leopard is divided into two sections: 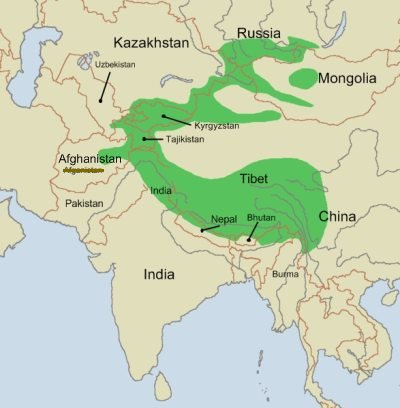 The map above showing where the snow leopard lives.

Home ranges (the area in which a snow leopard lives) varies widely. When prey is abundant a cat can use a relatively small area of 19.7 square kilometres (female in Nepal).

While in Mongolia snow leopards have been found to occupy a massive home range of 1,590 square kilometres and travel as much as 28 kilometres a day. See Snow Leopard Habitat (new window) for details of where this cat lives.

As a consequence, population densities can be as low as 0.5 per 100 square kilometres (in e.g., Russia and China) to hot spots of higher densities, 5-7 per 100 square kilometres (in e.g., Annapurna Conservation Area). Another area where there was a relatively high density of snow leopards was in Qinghai Province, China (see map below) – where, sadly, 14 were shot in 60 days! (src: Wild Cat of the World):

Vocal: Snow leopards do not roar (see Tiger Roar) but make the usual range of cat sounds except apparently for purring (src: Wild Cats of the World). When on heat the female makes a “piercing yowl” and this is a call made by both sexes for locating each other, it is thought.

The photo below shows a snow leopard using the Flehmen response to intensely smell the scent marking of another snow leopard. 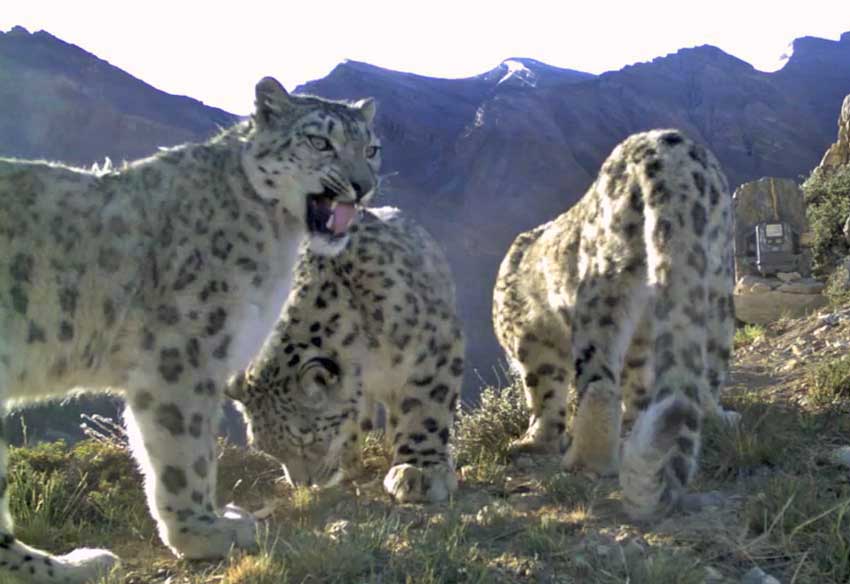 Snow leopard Flehmen response. The cat has his/her mouth open. Photo is a still from the video below.

Non-vocal: scent marks using faeces and urine and scrapes are used. Scrape marks are used on main routes and areas where there is a feature. The routes are usually the easiest to follow.

Scrapes are renewed. Adult males and females over 18 months mark and remark intensively. Spraying is also commonplace and usually on rocks. In fact it is usually on the undersides of rocks to protect the scent from the elements. These non-vocal forms of communication are designed to:

From Social Organisation of the Snow Leopard to Wild Cat Species