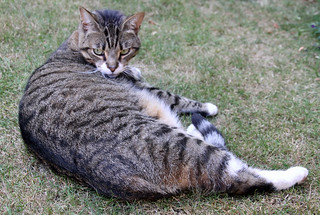 Spotted tabby cat. She is a sweet cat.

Despite the fact that some people search for spotted tab by cat personality, we can say conclusively that it does not exist.

The spotted tabby coat is not confined to any particular cat breed. It is ubiquitous amongst random breed, feral and community cats across the world.

It is impossible to think that millions of spotted tabby cats have the same personality. There are some real reasons why cats have a certain personality: genetic inheritance, socialisation and early experiences (“nurture” in the nature – nuture debate).

I am not saying that there is no connection at all between coat type and personality. I don’t believe there is a connection but I know some people will strongly disagree with me.

Once again though I have never read about a connection in any of the major books on cats and there is no research on this that makes a link between cat coat and personality. You can check research papers by going to “Google Scholar”.

The spotted tabby coat is probably the most common cat coats and the spots often merge to form lines. It can be difficult at times to positively say a cat is a spotted tabby. That in itself undermines the idea that they have specific personalities.

Do you have a spotted tabby? Would you like to tell us about his/her personality? Do you think they have a certain personality and if so why? You can write an article about it using the form below or leave a comment.