The cougar is not a big cat meaning it is not part of the group of cats called “big cats”. It is also worth mentioning at the same time that:

“the size of this cat is frequently overestimated¹….”

Some Peruvian pumas only weigh around 30 kilograms which is 66 pounds; about the average weight of a nine year old girl. Adult male pumas in Canada weigh 65 to 85 kilograms. Adult males are about 50% heavier than females. 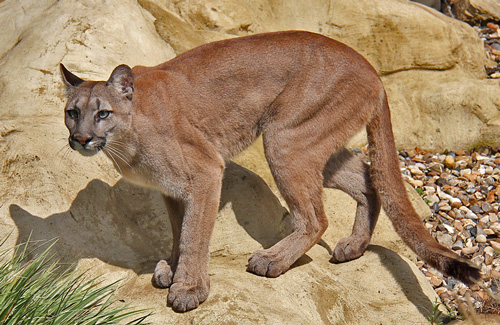 In terms of pure physicality, the puma could be one of the big cats, which are usual considered to be the lion, tiger, leopard and jaguar. On average, the puma is larger than the leopard. The big cats have the vocal ability to roar. The puma has small cat vocal abilities and in many ways behaves like a small cat. For example, it can’t roar but does purr.

However, there has been a lot of discussion over whether the puma could be classified as a big cat. As to lineage (part of the evolution of the wild cat species), the puma is ranked alongside the jaguarundi and the cheetah¹.

The argument for placing the puma amongst the small cat species include some small cat anatomical features:

From the general public’s viewpoint it is probably fair to say that the cougar looks more like a cheetah than a lion. Both the cheetah and puma have:

As regards to taxonomy, the puma has its own genus (Puma). A “genus” is a part of the classification process of the species and is in between “family” and “species”. It refers to species of animals that are similar. The classification of animals is in flux.

See a list of articles on the puma on PoC