As I understand it a ‘blaze’ in the world of cats is a line caused by the demarcation between two colors of fur on, usually, calico (tortoiseshell and white) and tortoiseshell cats. You will often see this line on the nose of the cat and it is usually right down the middle. The demarcation in fur color is light to dark, orange to black. The line can be broken.

The picture below that was spotted by DW shows the biggest blaze I have seen. I travels all the way down the face and over the nose, mouth and chin:

You will not see anything remotely more outstanding that this cat in respect of a blaze. It completely dissects the face of the cat. It is as if the cat has been painted.

I have a page on tortoiseshell cats. And indeed calico cats! I won’t therefore go over the ground again.

There is virtually nothing on the subject of the genetics behind the blaze in tortie cats. The term, though, is not confined to tortoiseshell cats. It is also used to refer to the demarcation between white fur in particolor cats as I understand it. These are cats such as the Ragdoll with white fur within the dark points. The blaze in this instance is caused by the white spotting gene but the behavior of this gene that produces the straight line is unclear.

It gets a bit complicated and no one as far as I can see has written about the glorious blaze and the genetics that make it. Because there is a very distinct symmetry in a cat’s blaze it would suggest that the development of the fur is in some way linked to the symmetrical development of the head and body. In other words the genes that create the symmetrical two sided appearance of cats and most animals is linked to the gene that produces the fur colours for tortoiseshell cats.

For the sake of completeness, there is nothing in Robinson’s Genetics about the striking Tortoiseshell cat blaze. Here is another example from one of the linked pages: 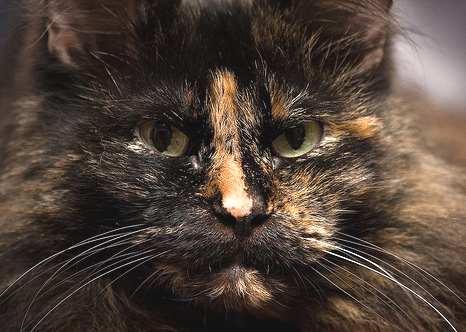 Tortie Blaze. A bit messy this one.