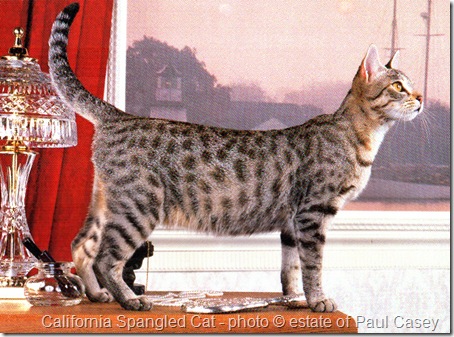 The history of the California Spangled cat is really all about its founder and creator, Paul Casey. Mr. Casey was a very able man of many talents. Creating the California Spangled cat was part of his work and it was a part that reflected his concern for the environment and his concern for all the “wild things of the coming century” that lived in it. I think he was ahead of his time. 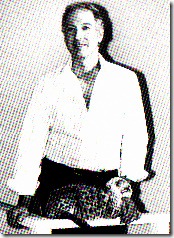 Paul Casey was born in California. He majored in physics and political science and was ranking top in western USA in naval science. He was a smart man who liked to stay fit. A close friend of his, Udana, says that he was a genius. He was a very busy person fitting the breeding of the California Spangled cat into his wide ranging activities. He was acutely aware of the need to start thinking about protecting the planet rather than abusing and using it. His various skills included:

It can be readily recognised that Paul Casey was not your typical cat breeder.

The Inspiration for the California Spangled Cat 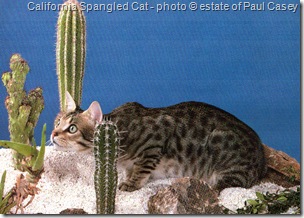 Having an underlying deep concern for the planet, Paul Casey was inspired to do something (to “feel and do something“) about the loss of wildlife generally, and the spotted cat in the wild in particular, when in 1971 on a wildlife safari in East Africa, with a companion, he heard about the killing and skinning of a leopard (the common leopard) the best known of all spotted cats. Paul Casey had a world vision. His thoughts and concerns were on a world wide level. I feel that I must quote his words from the 1989 California Spangled Cat Calendar 1989:

We thought that perhaps the presence of a loving little spotted cat in the home might somehow link us more closely with the plight of those in the wild…..We wanted to represent a planetary state of mind – a more creative approach to the problems of today – the image of nature and civilisation together – man in balance with his environment.

His sentiments are wonderfully current 20 years later and even more important today. I think it far to say that he sadly failed in that task at that time due to no fault of his own but he no doubt contributed to the gradual shift towards that goal: to be in balance with the environment. In line with his global vision Paul Casey selected cats from four continents to create his new, exciting and exotic breed of cat.

If the history of the California Spangled cat started with the inspiration for its creation, it was another 15 years of planning before “the first ancestral kitten was purchased” and breeding began. Paul Casey “assembled” a genetic foundation “core line” from several cat breeds. Individual high quality cats were chosen for their temperament and appearance. The breeds chosen included:

The core line was a foundation to the breed and was a way to eliminate unwanted throwback traits. To this line was added two cat types. Firstly, an Egyptian cat with the intention of creating a “more primitive” face and body appearance that was in keeping with the cat’s wild look. Paul Casey had seen cats in Cairo, Egypt. He referred to these cats as “Cats of the Nile”. They were and are Egyptian feral cats. Although he does not mention it they might have been feral Egyptian Maus which look like less refined purebred Egyptian Maus. They are common in Egypt and sadly persecuted. However, Mr Casey says that the “Cats of the Nile” were almost extinct and only found in a small feral cat population near Cairo.

He considered this Egyptian cat one of the last ancient cat breeds in existence. Incidentally, the purebred Eyptian Mau was in existence at the time the California Spangled cat breed was created and is considered to be the domestic version of the African Wildcat. This cat added a “domed forehead, prominent cheekbones, a full furred tail and brown toned eyes“, to the California Spangled cat. However the spots of the feral Cairo cat were “dingy“. To improve this a seventh bloodline was included. This was an Asian cat that had a short, velvety coat. Throughout the process, health was a foremost factor.

Paul Casey says that he combined and then separated the gene pool on alternate generations, breeding “across the pedigree” so there was never any inbreeding. Paul Casey’s objective in the California Spangled cat (one which he met) was a sturdy, intelligent cat that possessed hybrid vigor. 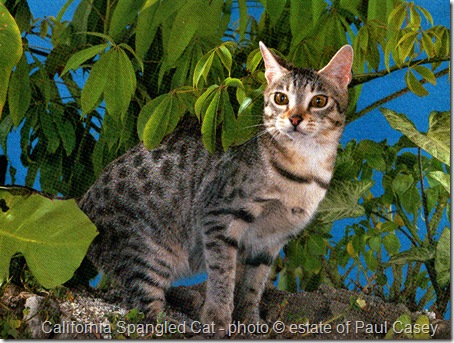 This foundation was created and “dedicated to the control of man-made toxic substances” that polluted (and continue to pollute even more so) the planet causing damage to DNA of all plant and animal life. The California Spangled cat was the figurehead. Paul Casey felt the urgent need to do something in 1989. We are still talking about it and still failing to make progress some 20 years later.

In the history of the California Spangled cat, it is well documented that it made its first public appearance in the 1986 Neiman-Marcus Chistmas Book. The cat was listed under His & Hers Gift of the Year. I have read that this marketing approach (which was unusual and bold) had a negative impact on the development of the breed. However, Paul Casey says that many orders for the cat were taken during this period of the launch of the cat, which he said would take three years to fulfill.

“..What followed was a deluge of orders that are now so backlogged, no more are being accepted” – Boston Globe

This was an outstanding cat breed.

As expected the California Spangled cat made a big impact. The Los Angeles Times (as only one example) said:

“The result is a striking spotted house cat that looks like a miniature wild one that just walked out of the jungle.“

From The History of the California Spangled Cat to Cat History