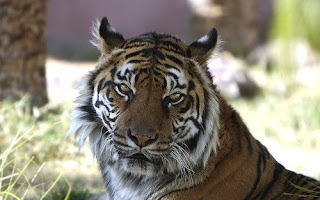 Tiger attacks are taking place increasingly frequently in Sumatra and other Asian countries. The Sumatran tiger, like all tigers are heading towards extinction (how many times have I said that?) because of the inevitable habitat loss. The Sumatran tiger’s habitat is the forests of the Indonesian island of Sumatra. And the villagers of this island are fighting with the tiger because they have been thrust together due to the shrinking amount of space that they share.

It has become a kind of war, with the remaining 400 tigers being forced into close proximity with the people who are the authors of their own misfortune (9 villagers killed in tiger attacks in the month of February 2009) and the terrible misfortune of the tigers (4 tigers killed by villagers in the same month).

The same war is taking place in Bangladesh in respect of the Bengal tiger and for the big cats, including the leopard in India. Please click on the following link to see a list of articles on the wild cat habitat and its decline.

The Sumatran tiger is listed as CR (critically endangered) under the respected but, I think ineffectual, IUCN Red List (see IUCN Red List for Cats). The tigers are treating the human as prey because there is little usual prey left due to reduced habitat and the people killing the tiger’s prey. The tiger would not normally hunt, kill and eat the human. Human population growth and unregulated short term financial gain is sure to wipe out the Sumatran tiger in the wild, there is almost no question about it but in the meantime their will be more tiger attacks. I suspect there is the usual poaching for tiger parts to feed China’s appetite for wild animal parts as well.

Sumatra’s lowland forests are shrinking at the rate of 2,700 square kilometers every year, the size of Luzembourg.

Here is a chart that shows the correlation between human population and rainforest cover. This is very significant for the wild cats and tiger. I have provided a link to the book in exchange: Human Activities and Tropical Rain Forest.