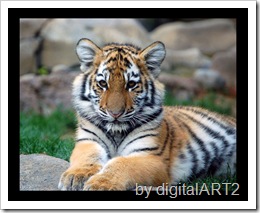 Thumbnail Photo by digitalART2 and published under a creative commons Attribution 2.0 Generic license.

It seems that is has always been a problem to accurately assess the wild (non-captive) tiger population in India. As I understand it, the estimate at the time of this article is 1,411 (how did they estimate down to the last one?). This figure is markedly lower than previous estimates indicating:

The map below shows us where the tigers are meant to be. You can click on the flags to see numbers. Some populations are incredibly small. Are these viable?

Please note: If the above map is not working (no blue markers) please refer to the one below, instead – thank you

It is, therefore, with excited anticipation that I have learnt on the internet that the people charged with conserving the tiger (and manifestly failing regrettably) are going to use  non invasive DNA based methods to assess the tiger population in India.  I presume that the government body organising this is the National Tiger Conservation Authority (NTCA) in cooperation with the Centre for Cellular and Molecular Biology (CCMB).

The method has been used to assess lion populations and the populations of other animals (e.g. bison in America). The method works by (in this case) collected faecal samples, which determines the individual as all material is unique genetically (in this instance the epithelial cells in the sample will be analysed) . Then using computer run statistical models the population size can, apparently, be assessed. I am  not sure how accurate it is and its accuracy must depend to some extent on what happens on the ground in collecting samples and how the information is input.

Epithelial cells come from membranous tissue covering internal organs and other internal surfaces of the body (or epithelium. which is a tissue composed of cells that line the cavities and surfaces of structures throughout the body).

We await the results with anticipation but don’t hold your breath! Sorry to sound cynical but the track record is not good and it has been a long track with plenty of time to change course and actually do something to protect the tiger rather than watch and record events that lead to the extinction of this most popular animal.

From Tiger Population in India to Wild Cat Species