One of the most imposing and characteristic sounds of nature is the tiger roar. How do they do it and what is its significance? 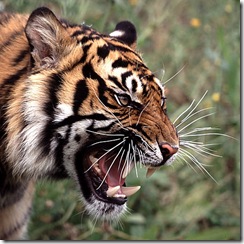 Picture (thumbnail): by GavinBell (new window). Published under a Attribution-NonCommercial-NoDerivs creative commons License — this site is for charitable purposes in funding cat rescue.

The frequency, pitch and loudness of the sound is very intimidating and it can paralyze some animals that hear it due to the loudness and low frequencies present. What is interesting is that people cannot hear a significant part of the range of frequencies produced by tigers. Humans can hear frequencies from 20 hertz to 20,000 hertz. Tigers and a number of animals can produce sounds at frequencies below that. It is called infrasound by scientists who study Bioacoustics. Infrasound can travel further and is part of tiger communication. Tiger infrasound is at about 18 hertz but when they roar they produce sound at frequencies lower than this. A hertz is “the basic unit of frequency in the ST system, equal to one cycle per second “ (src: http://www.yourdictionary.com) and http://www.sciencedaily.com. It may be possible to distinguish tigers by the quality of their infrasound (src:http://www.jvbigcats.co.za). The roar of a tiger can be heard more than one mile away. (src: http://fohn.net/tiger-pictures-facts/).

The larynx of the tiger is different to that of the domestic cat, while the larynx of the Puma, for example, is similar to the domestic cat (src: http://www.medwellonline.net). The Puma is another name for the Cougar or Mountain Lion and this cat cannot produce the tiger roar. The sounds produced are like those of a domestic cat, unsurprisingly. The larynx is where sound is generated, “Sound is generated in the larynx, and that is where pitch and volume are manipulated. The strength of expiration from the lungs also contributes to loudness” (src: Wikipedia).

The ability of the four big cats to roar comes from a larynx that is elongated and a specially adapted hyoid apparatus. Sound is produced in the larynx as mentioned when air expelled from the lungs passes through it. As the air passes through the larynx, the cartilage walls of the larynx vibrate producing sound. The extra length in the larynx of the big cats results in the lower frequencies and the tiger roar.

Cats can either roar or purr. The big cats; tiger, lion, leopard and jaguar can all roar because of the different anatomy of their larynxes. Of the four big cats, the lion has the largest larynx resulting in the loudest roar (src: http://uktv.co.uk).

The purpose of the tiger roar is long distance communication for a wide variety of reasons including after the tiger has killed large prey and as a call to a female as a prelude to mating. It is thought that the tiger’s roar is different in several ways from the roars of the other big cats, the lion, jaguar and leopard. 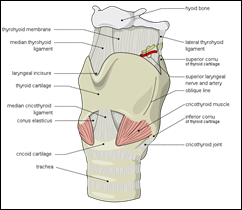 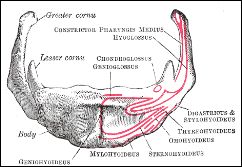 Both pictures are published under a Wikimedia Commons license. I adopt the arguments used by Wikipedia for reproducing the second image.

The tiger roar is not the same as the “roaring sequence”. The roaring sequence is only known in the leopard, lion and jaguar. The tiger lacks the grunt element in the sequence (source: Wild Cat of the World – Sunquists).

Gustave Peters, who is an expert on tiger vocalisations says that, technically, tigers are not one of the roaring cats (Page 356 Wild Cats Of The World). This is because the tiger roar is different regarding, “some critical features” from the roars of lions, leopards and jaguars.

The roar can be heard by humans over a distance of 3 kilometres.