4th July 2012: People living in California, especially those living south east of San Francisco in the area of Fresno, and who are looking to adopt a cat that is different, have that chance. The famous Cat House on the Kings, home to about 1000 cats living on a 6 acre site, have taken in 6 cats from the Middle East – five from Oman and one from Kuwait. They are typical of that area.

Plenty of white and often with the ‘Van’ pattern. I am referring to the Turkish Van inverted ‘v’ on the head and odd blobs of dark fur and perhaps a dark tail. They are not Turkish Van cats but they will have a genetic makeup (genotype) that is probably unique in the United States. They are pure rescue cats but rare cats in North America. 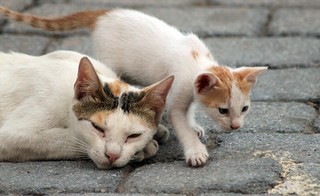 Omani Street Cat and her Kitten – this is a direct feed from Flickr. If it disappears sorry! Photo by Greg.

These cats, from the Orient (the Middle East just about qualifies as the Orient), are oriental in appearance.

The word ‘oriental’ in cat fancy language means slender. Breeders put a lot of effort into breeding oriental cats. Here you have the real, natural thing! Well they are random bred cats.

The location of Cat House on the Kings:

The big question is why and how this cat rescue happened. People in the Middle East saw a television program featuring the Cat House on the Kings and after a lot of effort rescued these cats and had them flown 8,000 miles to California;  an expensive mission and tons of read tape and bureaucracy to overcome. It must have taken a lot of effort. The 8,000 miles the cats traveled is the longest ever flight by cats apparently.

It is a nice story but it highlights the fact that there can’t be any rescue centers in Oman or Kuwait. We are told that people rarely keep domestic cats in that area of the world and ‘euthanasia’ consists of taking cats to the desert and releasing them – grizzly and cruel. Who are we to criticise, though? We, in the West, don’t do much better despite well drafted animal welfare legislation.

.So, for local people, here is a fleeting chance to adopt a rare cat and at the same time say thank you to this very special rescue center – a true no kill and no cage rescue facility that unsurprisingly continues to expand. They need more funding and more volunteers (July 2012).

I am sure a donation would be gratefully received.